Too Bad It Was Short-Lived--Vengeance of the Moon Knight 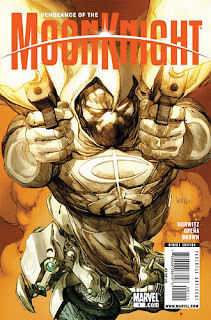 Vengeance of the Moon Knight Volume 1
Collecting issues 1-6 of the brief Moon Knight re-launch after Huston and Benson's run, this arc shows how to do Moon Knight right. Plus, the fantastic art by Jerome Opena helps.

Issues 1-6 where Moon Knight returns and has to face inner-demons along with living ones (in the form of his returned arch-enemy) were great. Sadly, they were followed by two mediocre issues where a cross-over with Deadpool occurred, a pointless issue with Spider-Man (which did look great thanks to art by Juan Jose Ryp in his Marvel comics debut), and another good issue with the Secret Avengers, and then the series ended. True, there was a Moon Knight mini-series that tied in with Shadowland and had the same writer in the form of Gregg Hurwitz, so you could maybe say this lasted 13 issues instead of 10. Anyways, these first six issues that re-introduced Moon Knight after the faking of his death and going down to Mexico was great. 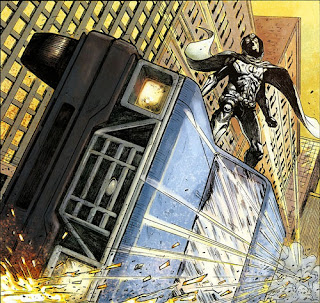 There is some great art, a few good points made by Moon Knight--in an earlier apperance Spider-Man accuses Moon Knight of lacking a code and he asks him how that's been helping, and we see a huge poster of Osborn's secret Avengers. Plus, in issue two Moon Knight predicts what actually happened in Marvel's siege event:
All-in-all this was a great opening even if it was bit decompressed at times (one issue is pretty much all fight-scenes). However, we get some great-looking action, looks into Moon Knight's mind, and otherwise have a great time. Hopefully the new series coming in May will be as good or even better. It has Bendis and Maleev so I have high hopes.
4 out of 5 stars.
Posted by David Charles Bitterbaum at 10:00 AM