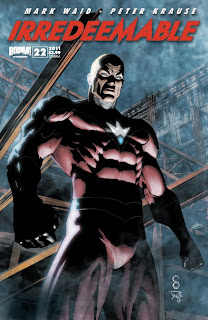 Irredeemable #22
I've done short reviews of this comic before, but this issue was one I felt was worth spotlighting.

In this issue we check-in with some of the Paradigm as they try to recruit former super-villains who have been pardoned for past crimes but still really have issues. The aliens who were using the Plutonian realize he can't be controlled and dump him while he continues to live in a fantasy world. Oh, and for the first time we see just what Modeus is thinking, and it is interesting to say the least: 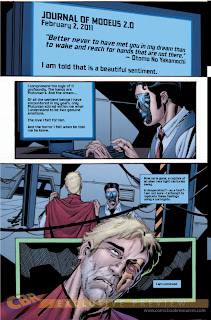 He secretly loved the Plutonian--as it was revealed "Tony" knew for some time--and even though he was the archenemy to the Plutonian he misses him so much he's dressed up another hero like him and is having a sort of homoerotic relationship with it (I say sort of because Modeus is a machine and therefore not really a man or woman). Why do I find this interesting? Well, it takes the concept of the hero verus the villain and introduces this strange sexuality to it that most comics are scared of. I mean, how thin is the line of love and hate between the Joker and Batman, the Punisher and Jigsaw--hell, Jigsaw outright told Frank he loved him (Punisher War Journal #23 from back in 2008). Having that line actually get crossed, however, is intriguing. That Modeus is going to try and get "Tony" back to earth he loves/hates him so much, means stuff is just going to get more interesting. Anyways, sorry for that long bit of deconstruction of a small part of a comic, but I found it very intriguing in how it riffs/points out mainstream comics willful ignorance of the sometimes blatant homo-eroticism of two men in tights grabbing each other. 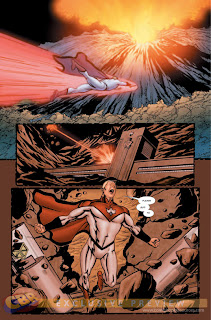 As I said, the other bits of the comic are interesting too and I am genuinely excited to see what comes next now that it is becoming clearer where all the pieces to this narrative puzzle fit. A great issue.
4 out of 5 stars.
Posted by David Charles Bitterbaum at 1:00 PM