A Good Finish After a Weak Start--Astonishing X-Men: XenoGenesis #5 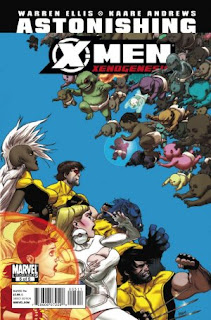 Astonishing X-Men: Xenogenesis #5
The 3rd arc of the oft-delayed Astonishing X-Men series by Warren Ellis that has been split between the main series numbering and this off-shoot miniseries that started before the 2nd arc (Exogenetic) had even finished. This seems to be the last of the Ellis-helmed X-Men comics, but have the delays been worth it? Does, "sort of," suffice as a good answer?

In this storyline Ellis did for Astonishing X-Men he ties in his concept of, "Ghost Boxes" from his first arc, and goes back decades in comic's history to bring back Alan Moore-created Captain Britian characters like Jim Jaspers, a killing machine known as the Fury, and the concept of babies altered in the womb by radiation from Jaspers that are known as "Warpies". The Warpies kicked the story off with the X-Men investigating what they hoped were new mutants but were in fact irradiated infants. Things started off slow and disappointing, before kicking into action and seeming to drop any plot for scenes of the X-Men fighting those robots known as Furies. Kaare Andrews does a pretty good job with the art, but is prone to "cheescake" styled drawing. Observe: 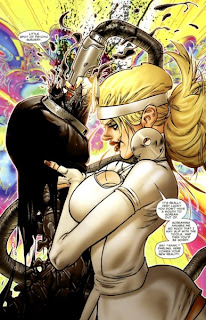 I sound critical of the series so far, and it hasn't been that great, but this issue finally does a good job of balancing story with action and delivering a political message about how people want to save the world, but don't care about a small village in Africa. Also, Ellis does a really good job writing Emma Frost as shrewd-and-snarky character which other people seem to have trouble portraying her as, at least since Grant Morrison did such a great job (and Joss Whedon made an effort ). I genuinely liked this issue, but am disappointed it took until the last in the series for this to climb out of mediocrity into a somewhat fun state. It'll probably read better in trade without the delays that seem to have plagued Ellis' work on Astonishing X-Men. As this seems to be the end of his work though I guess we won't be hearing more about these Ghost-Boxes he has been so keen on using in his stories. I read somewhere he originally was planned for four story arcs, so maybe in a perfect world this sub-plot would have bloomed further. We may never know.
3 out of 5 stars.
Posted by David Charles Bitterbaum at 1:00 PM