New Fear Itself Teaser--Not Too Impressive

Marvel has released a new teaser for "Fear Itself" and I don't find it too interesting as some of the earlier ones were: 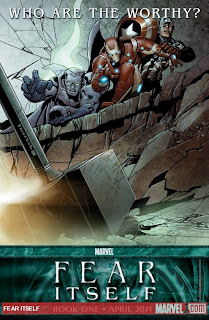 There is of course speculation on the internet why it is being asked who is worthy to wield Thor's hammer--after all, why is Thor missing? Then we have the odd choice of characters to be looking at the hammer. Captain America and Iron Man makes sense, but why is that Gargoyle fellow there too? Isn't he a D-lister at best? It just seems so random.

From other teasers it seems Thor's dad Odin will be back and might take Thor down, so perhaps Thor is going to die (AGAIN) and some heroes will have to take up his hammer or something. I don't know, maybe if we knew what exactly Fear Itself was about I'd be more excited. Really, it's just all about heroes losing hope and fighting a God of Fear or something, and vampires are involved, and the whole thing just seems messy. The one beacon of hope is that Matt Fraction is writing it and he generally does a great job.
Posted by David Charles Bitterbaum at 9:26 AM