Let's look at two comics that aren't very good. One is a mainstream Fantastic Four Annual, the other is from some independent company I have never heard of called Zip comics and features, "The Schizophrenic". Hoo boy, this should be interesting... 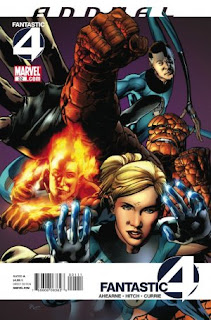 Fantastic Four Annual #32
The daughter of an old villain spends months in Johnny Storms brain for some reason and gets a female character pregnant with robots or something. The dialogue seems stilted, the plot makes little to no sense...at least the art looks good. The idea Johnny could have a kid out there is a story idea that will either be forgotten and never mentioned again, or used soon now that he has died so that someone can take his place. This comic was confusing, convoluted, and otherwise pretty useless. At least it looks decent.
1 out of 5 stars. 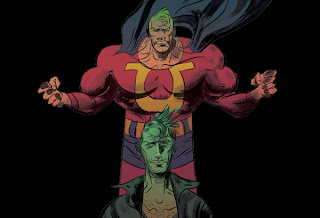 The Schizophrenic #1
The basic idea is that our protagonist Sam C. Howe suffers from schizophrenia. This manifests itself in various hallucinations, with the main one being his imagining he is a super-hero known as Uberman. Okay, this has some promise as a serious exploration of mental illness and the power-fantasy of heroics. Unfortunately, the comic either tries somewhat unsuccessfully to skewer corporate culture and fast-food or takes a very bizarre turn where Uberman fights against religion because it is evil. The thing, I can't tell if the comic is trying to make fun of those who hate religion, or is actually trying to make a ham-fisted case that religion keeps us from self-actualization or something. 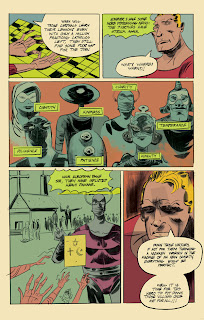 The art is...well, its okay, but not what one would call good, and story seems unsure whether it is trying to comment on mental illness or rant against religion (or be in support of religion in a satiric way, I honestly can't tell). I hate to be negative about an independent comic because when you aren't a big company it can be difficult to get your work out there, but this just isn't that good in either story or art.
1.5 out of 5 stars.
Posted by David Charles Bitterbaum at 11:00 AM