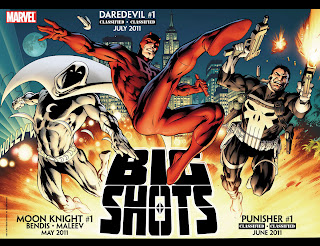 Marvel has a new thing called the, "Big Shots Initiative," with the already announced "Moon Knight" series, some more Punisher comics picking up where Rick Remender left off in his series and mini-series, and Daredevil returning with a new #1 comic. Does that mean that the Black Panther comic which took over for Daredevil will keep it's current numbering even though that is the actual number of the Daredevil comics? Yeah, that's confusing. Should be a fun summer with these comics at least, assuming the writers and artists are good!
Posted by David Charles Bitterbaum at 7:00 PM