Terrible Comic Coming Out Next Wednesday. 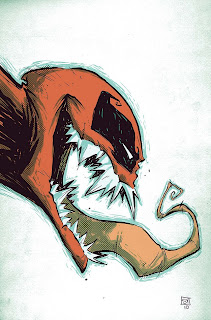 I just wanted to warn everyone out there, that the terrible, "What-If The Venom Symbiote Possessed Deadpool?" Whatever you do, do not buy this comic, it is one of the worst I have ever read. How do I know it is bad? Well, it originally ran in four parts as a back-up to the most recent "What-If" mini-series. For your benefit I have put another copy of the review after the cut, along with some additional stuff. You have been warned:

What If The Venom Symbiote Possessed Deadpool?
That was painful. Rick Remender normally writes such good stuff, but his attempt to make a humorous back-up strip for the What-If comics just fails terribly. Whether it is trying to make 80s Boy George Jokes, having a street-talking Watcher, or making countless comments about Jehri Curls, this is just plain bad. There are maybe one or two jokes I laughed at, with one being a character channeling fan-hate towards how street-heroes should only face street-heroes instead of galactic events. Other than that, this is just constant groaner after groaner of jokes falling flat. I mean, a spoof of "Jerry Springer"? Really? Apparently this back-up is being collected as its own comic. Don't buy it, stay far, far, away. At least the art is okay, so it isn't a complete and utter abject failure, but just barely.
.5 out of 5 stars.

Now, for your benefit I present the only joke that I liked in this entire comic as mentioned in the above review: 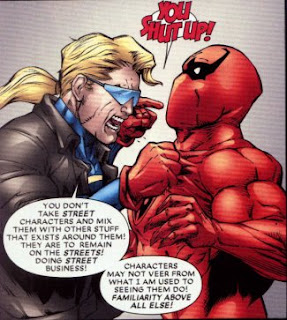 That's it, the only single one.