How One Panel Can Ruin All Goodwill Toward A Comic.

You know when a comic is liked by people and the writer is held in good esteem even if he made some mistakes during his run on a comic? Imagine having one panel that can just ruin all the goodwill you built up. Observe: 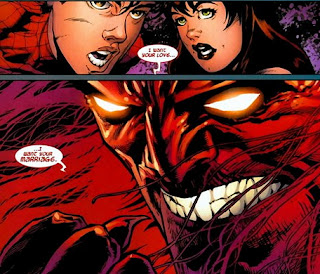 And with that J. Michael Straczynski destroyed any love people had for his time spent doing the Spider-Man comics. Sure, you can say then-Editor-In-Chief, Joe Quesada made him do the stupid storyline where Peter and Mary Jane's marriage was magically wiped away from existence, but that doesn't change the fact that it was done. Just because Marvel editorial wants something to happen doesn't mean it is a good idea. Has the spider-man comic really been that much better with the marriage gone? Seriously, I'm asking--I stopped reading it a few months after the continuity-wipe. Now if we want to see Spider-Man married to Mary Jane we have to read the terrible newspaper comic where Spidey does little more than whine and get whatever guest star shows up to do his fighting for him. That, or Aunt May tries to marry Mole Man. The last part isn't even a joke.
Posted by David Charles Bitterbaum at 10:00 AM