I had a previous post in late December in which I compared the experience of playing as a Goblin or Worgen in World of Warcraft. Having played some more levels I thought I would give an update on what the world is like from your teen-levels to high 20s. 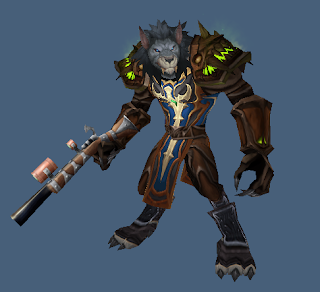 After such a great start, the whole Worgen storyline seemed to disappear. Yeah, you have quests you can run in Darkshore, but any Alliance character can do those and they don't have much of anything to do with Gilneas or Worgen. There just doesn't seem to be much relating to Gilneas or the plight of the Worgen in the game currently. Maybe this will change, but there is seriously pretty much nothing that expands on the Worgen storyline. It's quite depressing, and other game sites have commented on this glaring hole also.
N/A out of 5 stars. 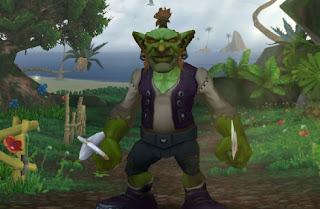 Considering how medicore the Goblin starting zones are, I was surprised by how much I enjoyed the Azshara zone you go into during your teens and up into your 20s. Seriously, this place is loaded with fun quests, from getting your own elite group of soldier characters who help you fight Naga, to helping a super-intelligent raptor escape to another planet. There is also a long intriguing story about the blue Dragonflight which results in some epic fighting, and riding the rocket-railway around the zone is always a hoot. Compared to how displeased I was with the intial Goblin experience, this was a pleasant surprise. True, you don't have to be a Goblin to play in this area, but considering how almost all the NPCs are Goblins and it advances the Goblin storyline, you may as well just roll one for the full experience.
4 out of 5 stars.
Posted by David Charles Bitterbaum at 10:00 AM