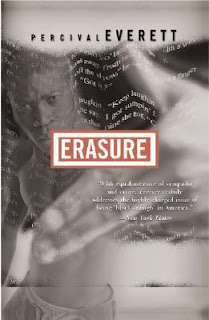 Erasure by Percival Everett
This is not only an extremely clever book by Everett, it is also funny, sad, and all-around good. Let's go into detail about why I like this book and the genius ways it uses the book format.

Thelonius "Monk" Ellison is a well-educated writer who makes literary books no one bothers to read. Finding one of his books about ancient history in the African-American section despite the only thing about it that's "black" being his author photo, he becomes more and more annoyed. The final straw is when a "ghetto-lit" book full of improper grammar and swearing that otherwise comes off as the lowest sort of entertainment becomes a huge hit. So, he sits down, invites an pseudonym and writes his own book of that genre. The genius thing is, that book itself is contained within Erasure as a sort of novel-within a novel, that if you didn't know was an intentional parody of those types of books you would think it was utterly deadpan and real.

The conflict that comes in is that Monk really needs funds to support his mother's deteriorating condition, so he has no choice but to actually pose as his alter-ego, Stagg R. Leigh, which of course results in various interesting scenarios. The book is a great piece of fiction that makes you truly care about the characters, but the thing that makes it genius is its commentary on the way race is perceived in America--after all, why does this educated, nice man have to pose as a living racial stereotype to get any public attention and success? I would recommend this book as both a fun and thought-provoking piece of literature. It's very interesting.
4 out of 5 stars.
Erasure

if you would like to buy it.
Posted by David Charles Bitterbaum at 6:19 PM