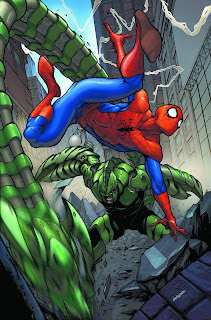 The Amazing Spider-Man #654
I haven't been following the Spider-Man comic for more than a year now, so when I pick up an issue for the Venom back-up, what do I think of the main story itself? Hint: I am utterly confused.

I had no idea what was going on in the main story of this issue. There were these things called Spider-Slayers and Peter Parker was working with some scientist who comes close to figuring out Spider-Man's identity but falls short, and Jonah Jameson is Mayor of New York or something (although I recall reading about that months ago). Yeah, this was odd. The art was nice, and the dialogue was snappy, but as I said, reading this was like trying to jump in the deep end of a pool when you don't know how to swim. Some guy is secretly a new Hobgoblin, Mac Gargan is the Scorpion again, and  (spoiler alert), Jonah's wife dies, as various comics websites have commented about. The thing that makes the scene genuinely good and one of the few things I grasped is how Jonah actually responds: 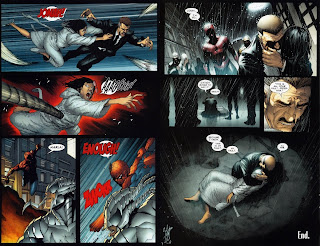 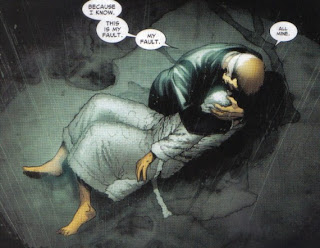 Wow, an instance in which Jonah doesn't blame Spidey but takes full responsibility for problems in his life? Wow, that actually makes him possible to relate to and sympathetic, something hard to pull off. Still though, I was very confused by the overall story. However, I didn't pick the issue up for the main Spider-Man story, no, I was curious about the Venom back-up that led into the 654.1 issue and upcoming series. That not only read great, but looked great. Observe: 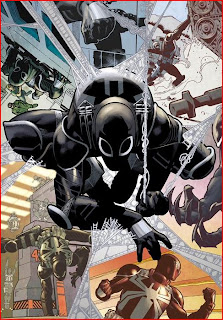 Basically we see Flash Thompson with special drugs to help him control the Venom Symbiote. The issue is that it can make one aggressive, and over time possibly bond permanently with the user. However, as long as you're in control it makes a sweet combat suit. It was fun reading and I hope whenever they collect the upcoming Venom series they include this and 654.1 which from what I've seen is very Venom-focused.