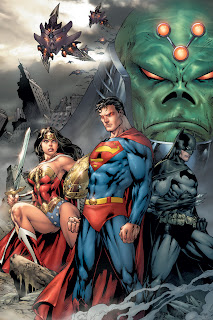 DC Universe Online Legends #2
In an Elseworlds-style tale, Superman is dead and Lex Luthor is humanity's best hope against an alien invasion. Okay, that plot piques my interest, but does the second issue of the series keep the momentum going?

Another great alternate-universe tale, with the alternate universe in this case being part of a playable video-game with the same title as the comic (minus the "Legends" they tacked on for some odd reason). Why do I like this comic? Mainly because it is written well, has decent art, and features one of my favorite DC villains (of the admittedly small amount I know), Lex Luthor. In an alternate future where Luthor may have doomed humanity, a small rag-tag group of the remaining heroes fights for survival--whilst we also see some incidents in the past that led to the current apocalyptic events. 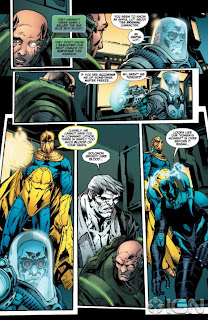 One interesting aspect of the comic is it shows what Lex Luthor would do with his life after achieving his goal of getting rid of--or in this case, killing--Superman. What would he do? Essentially doom the earth and then try his hardest to save it. Perhaps Luthor really would try and save the world without Superman around (although he would be at fault for nearly dooming it to achieve his goal of Superman's destruction, so it's kind of a wash).

I would recommend this comic to anyone interested in reading something by DC that isn't bogged down in continuity or that requires you buy a bunch of issues to get some huge story (e.g. Blackest Night and its countless tie-ins). You don't have to be playing the game to enjoy this comic--I'm not--but if you are playing the game I'd imagine would be a great thing to go with your game-playing.
3.5 out of 5 stars.
Posted by David Charles Bitterbaum at 10:00 AM