Now we move on to the Marvel Pamphlet and what new or interesting things are in there. This is a big post today, but it's fun as I seem to rant a bit more with these solicits than yesterdays, hating on cross-overs and event comics in a somewhat humorous fashion, so enjoy that. As with the earlier post I won't describe everything that looks good, just those that are especially interesting. So, while X-Factor is always a great read I won't be mentioning it because that isn't anything new...although I did just mention it, now that's irony (I think)! Anyways, let's proceed... 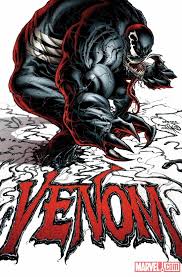 Venom #1, Page 1, $3.99
Okay, I admit it, I loved Venom as a youth in the 1990s as did many other young-folk. These days though, I honestly find him a bit outdated, like he belonged in the over-the-top 90s but doesn't quite work today. Why am I interested in this comic if I have all those negative things to say? Well, Rick Remender is the writer, and I loved his Punisher stuff, and Tony Moore is the artist, and he's equally incredible in the work he does with other artists and sometimes Remender (like on Fear Agent). Those two make me actually interested in what happens, even though it looks like a re-tread of the "Venom works for the government" type story that has happened before. As I said, I've got a stack of Venom comics and I just have to pull this out if I want that story: 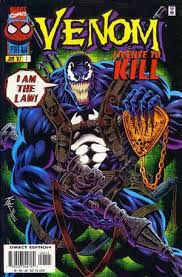 Again though, with this team I think we may get something special, and Marvel sure isn't scared to promote it, putting it on page one of the whole solicitation pamphlet. 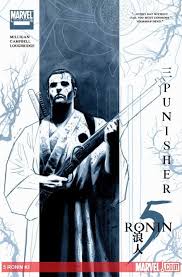 5 Ronin, Page 2, $2.99
Five different one-shots that seem to tie together using popular Marvel characters in ancient Japan? Now that sounds wacky. I still don't think I want to buy it before reading reviews, but one thing worth noting is that this is one of those $2.99 titles that Marvel claimed they would be releasing a bunch of to compete with DCs "Everything must be cheaper and have less pages!" announcement. With all the titles that are still $3.99 though DC has got Marvel beat in the low-price category. But hey, we get some alternate-continuity tale for cheap while the big-name titles still cost $3.99...yah? 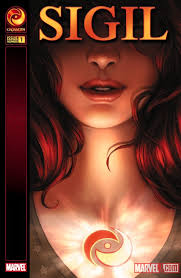 Sigil #1, Page 4, $2.99 AND Ruse #1, Page 5, $2.99
I have never read the Crossgen comics, so I have no intention of buy these. I just found it interesting that Marvel has unearthed the corpse of this line since being acquired by Disney (who owned the rights and now therefore Marvel has the rights) to create all-new stories using the familiar characters. Kind of like building a new bar after the old one burned down but keeping the same brick-work even though the inside of the bar is completely different.

Fear Itself: Prologue , Page 16, $3.99
Kicking off the next big Marvel event, which I have bitched about, this little tale apparently sets the stage for the Fear Itself mini-series and numerous related tie-in comics. This comic is $3.99 and I'll bet you dollars to doughnuts the main series is going to be $3.99. I don't know about you, but I just don't have the scratch to fund some mega-event. I'll skim this comic at the store, but you know the fanboys and fangirls are going to be buying every single damn issue that comes out, and I would too if I hadn't been so turned off by Marvel events after the mediocre Secret Invasion and pretty bad Siege. Hell, I'll probably just buy the main series and eat noodles for a week because I too am a mindless slave to comics. I need an intervention. 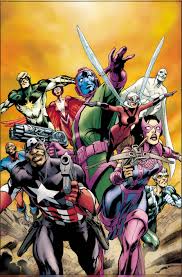 Avengers: The Children's Crusade--Young Avengers #1, Page 21, $3.99
Besides having the longest title of any solicitation this month, this comic also seems to be a one-shot but isn't solicited as one. It isn't listed as being the first out of a certain number of issues either, however. This looks like a comic that takes place in the future with our Young Avenger squad all grown up, but I think this is more clever than that. I think this comic is about the Scarlet Witch (whom the team is looking for in the main mini-series) messing with reality again and this is the result of her muddling. I could be wrong, but I think that's the case--meaning this comic ties into that series quite closely.

FF #1, Page 46, $3.99
I assume this comic will feature the three remaining living members of the Fantastic Four after one of them dies (my money is on Invisible Woman or The Thing). I quit reading Fantastic Four because even though I tend to enjoy Johnathan Hickman's work, I found reading the single issues to just be too slow--hearsay I know. I think I will at least pick this up and look through it before setting it back down and marveling at the 12 or so Captain America comics that are also coming out this month--unrelated to this solicit, I know, but 12!?

Marvel Zombies Supreme #1, Page 48, $3.99
Do you hear that? That is the sound of the bottom of the barrel being scarped. In this case the barrel is an original idea for Marvel Zombies. 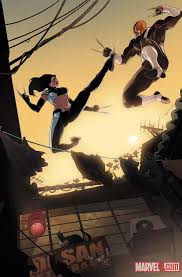 Daken: Dark Wolverine #7, Page 64, $2.99 AND X-23 #8, Page 65, $2.99
I read Dark Wolverine, I don't read X-23. This is why I hate cross-overs like the one happening between these particular issues of these series. I understand the concept is to get readers to try and read something new, but I purposely don't read X-23 because I don't care about Wolverine's female clone. I find her dull. "Oh, she was bred to kill and now is trying to learn to be a normal person!" you may say, and notice that my face is that of someone who still doesn't care. I prefer Daken, he is clever, and evil and not concerned with "fitting-in" as if this were some cliche' teen soap-opera. If I want to see Daken's story though, I have to read X-23. The thing is, I see the logic in this cross-over as both characters are genetically related, both series have the same writer in Marjorie Liu, but I still don't want to read about X-23. Oh well.

Cyclops #1, Page 72, $2.99
I like Cyclops when he is written well and hate him when written as little more than a whiner. I have no familairity with the writer, Lee Black, so that makes me leery of this. I hope it is good, though.

Strange Tales II Hardcover, Page 83, $24.99
I loved this mini-series so I wouldn't mind having it all collected in one book. I could give my 3 issues of this series to a friend I want to convince to read comics, and keep this for myself. I might wait for the paperback version though.


That's it! If you stayed with my post all the way to here you are either a big fan of my writing, a truly patient person, a masochist, or all three.
Posted by David Charles Bitterbaum at 10:00 AM