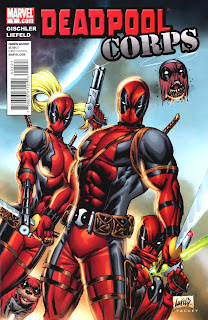 Deadpool Corps Volume 1
I wasn't too kind in my review of the Deadpool Corps Prelude, but this was better. How much better? Find out after the cut! Yes, I know I review too many Deadpool comics, but I like the character.

Victor Gischler seems to up his writing game back to the quality he had when writing Deadpool: Merc With a Mouth, at least in terms of this comic actually being humorous. Liefeld seems to actually be trying with his art too, with artist Marat Mychaels turing in a dynamite imitation of Liefeld's work for issue six--even if his drawing of Lady Deadpool out of her armor looks like a cheap knock-off of the slave-outifit Princess Leia wore in Star Wars: Return of the Jedi. Speaking of pop-culture references, this comic is full of them, from Hawaii Five-O to Deadpool's consistent love for Bea Arthur inspiring the name of the ship. While funny now I wonder how well some of these references will age--Daniel Way seems to be wise to avoid them in the main Deadpool book. Then again, Hawaii Five-O is pretty old-school as it is (even with the new series). 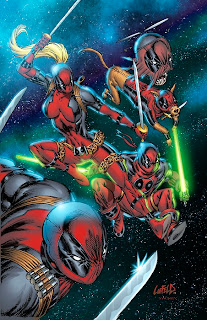 The story itself was somewhat interesting, with the Deadpool Corps fighting some intergalactic evil known as the "Awareness", or facing off against an individual known as Champion on multiple occasions. Oh, and a lot of aliens get chopped up who dare stand in the way of the Corps. This wasn't amazing, but had enough laughs, action, and otherwise fun-feeling to be a bit above average.
3 out of 5 stars.
Deadpool Corps - Volume 1: Pool-Pocalypse

if you want some silly fun.
Posted by David Charles Bitterbaum at 12:00 PM