Now for me to rant about a game I love: Saints Row. 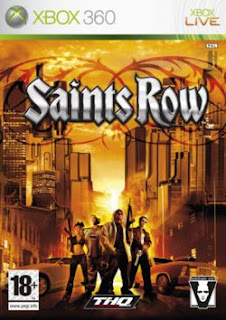 Saints Row
Remember that period of time between Grand Theft Auto: San Andreas and GTA IV? There was a game that came out that was unquestionably a rip-off of the series, Saints Row. The thing is, I absolutely loved that game and its sequel. The radio was great, the missions were fresh, and the ability to customize cars even more than in the GTA games and alter your gang felt so cool. The thing that cemented the game in my mind though, were the last three missions and the way the game ended. Now I will go into detail about these missions, and why I loved them --making this not really a review so much as me gushing over a particular part of a game barely anyone remembers. I wonder if I could get more exact and obscure.

First things first, this game wasn't perfect. It had bugs, some missions were too hard, and the graphics weren't always the best--this is clearly a first-gen title for the Xbox 360. I look past all that though, because for some reason I just love how things wrap up. After taking down the three rival gangs in the city, a congratulatory cinema scene rolls with Saint's Leader Julius (voiced expertly by the great Keith David) telling you how you did it, the city is yours, and your crew asking you what to do next. Credits roll, happy ending....but wait! After the credits you get a phone call from Police Chief Monroe--it seems Julius is being held captive by the police and if you want him back you have to do a favor--namely kill mayoral candidate Marshal Winslow. Now, you've spent the whole game hearing ads for this guy and his opponent Alderman Hughes, so you kind of want him dead just so the ads will stop. So, you hijack his bus, and drive it on the train tracks. Then, despite no trains showing up for the whole game, one finally does and in the most glorious explosion ever blows up the bus. Favor done, you get Julius, right? Wrong.

The police chief isn't playing fair, so you and the Saints decide to take him out during Winslow's funeral procession. Sniping him is easy enough, but then the game brings all hell down on you, throwing more police and other law-enforcement at you than in any other point in the game, making surviving neigh-impossible. If somehow you actually escape, all seems well and you get a call for Alderman Hughes wanting to thank you for taking out his opposition, with him inviting you on his boat. At this point save your game, trust me.

So, you go to Hughes boat, and in the process he tells you that because of your efforts, all of the city is after the Saints, he comes out smelling like a rose because no one suspects his involvement in Winslow's assassination--which it is implied he had the chief force you to do, and he's going to kill you. While talking, a montage of all the characters you have met in the game plays, with some shocking reveals (who the undercover cop was I actually did not predict), with sad endings, and Julius looking out over the yacht you are on in a suspicious fashion. Then, right as Alderman's body-guards advance on you, your character speaks for only the fourth--and last--time in the game about how this is all dull, and then the boat blows up. As the second credits of the game roll a radio broadcast announces a bomb was planted, and then...that's it. The game doesn't pick back up after those last credits, it just ends and goes to the main menu screen. I was surprised the game didn't just pick back up on shore, but no, it really finishes--with a bunch of loose ends picked up in Saints Row 2. I think that really surprised me and made me feel like the game had given a big, "f-you, what did you expect?" to the player--which cracked me up.

I mainly picked up Saints Row 2 just to find the secret mission where you go to the police station and listen to some tapes that reveal some people knew all along who the undercover cop was, and that it was indeed Julius who betrayed you--followed by you facing off against Julius and killing him once and for all. That was fun, but for some reason I never felt the same "wow" in Saints Row 2 that those last few missions in Saints Row even though the sequel was superior in game-play, graphics...pretty much everything. I don't know why, but I just inexplicably love the way Saints Row finished, making those last 3 missions alone the reason it is one of my favorite games ever. Of all the games I love this one has got to be the least-liked by critics and have the strangest reason for being one faves.

That's it, if you read all of this rambling post you either were riveted by the game description the same way I was when playing it, have a bunch of time to waste, or were bored and had nothing better to do. Thanks for listening/reading at least, I promise my other posts will be more interesting than me deconstructing a small part of an old game for no reasons other than my own satisfaction. How about I schedule a post of a comic review in a couple of hours, for instance? Yeah, that'll be fun.
Posted by David Charles Bitterbaum at 12:10 PM