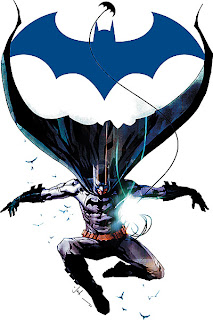 Detective Comics #873
Let's be honest, was there ever any doubt that teaming up Scott Synder and Jock for this book would not result in some incredible stuff?

This was an awesome book. From the scenes of Dick Grayson (this comic's Batman) hallucinating some scary stuff (monsters, a genuinely creepy scene with Barbra Gordon) to his donning a jet-pack-style batsuit to fight the bad guy, this is a great mix of a dark mood, with the right bit of kitsch to keep things from being too depressing. I mean, a jet-pack suit! That just makes the kid in me yell, "Sweet!" 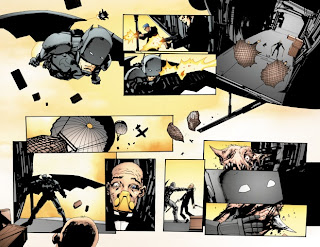 The scene where Dick fights our baddie--The Dealer--is truly great also, with him making some creepy points about how he actually loves the Batman for what he does. Plus, the end of the issue where Dick thinks about how the city seems to be getting meaner and more twisted seems to foreshadow more to come in this series. There was so much story jammed into these last three issues I can hardly believe it only took a few for this to become one of my must-buy comics. Plus, with the Jim Gordon back-up gone this was only $2.99, so that's doubly-awesome as I didn't really care for the back-up at all. Pick up issue #871 and go from there, you'll be quite pleased.
4.5 out of 5 stars.
Posted by David Charles Bitterbaum at 10:00 AM