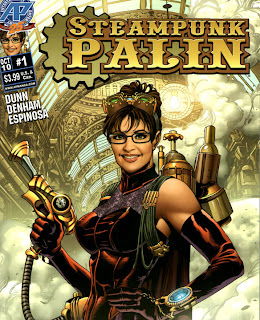 A website I enjoy reading named ComicsAlliance has an article about what must be the most stupid comic idea ever. Steampunk Palin. Read the link then see my thoughts after the cut...


Apparently in a world where Oil is destroyed, Palin takes on the remnants of Big Oil and Nuclear-Power to fight for people to use Geothermal energy. She is assisted by a robotic Obama and John Mccain. Really? I mean, isn't this the woman who was saying we need to keep deep-water drilling while the ocean was filling with crude from the BP Oil Spill that is arguably the worst natural disaster ever? Oh, and the Oil-Nuclear alliance is run by Al Gore. What? Ol' environment-loving Al Gore suddenly works for power sources he has been saying we need to get away from, and Sarah Palin is so hated by the people she in reality champions they try to blow her up resulting in her being half-machine and half-human?

Then again, this is from Antarctic Press, the same people who brought us the comic "Twilit" a book about Vampires who smoke weed...and that's about all I know about it as I couldn't even bother to open the cover when I saw it in the comic shop. Oh, and the article discusses how the comic is loaded with pin-up pages, because apparently being slightly attractive and doing politics feeds the fetish of people who love politics but wish we could sex it up a bit. I mean what's next, a Justin Bieber spoof where he is a beaver? Oh wait, two comic companies are doing just that. We as a society are doomed, mark my words.
Posted by David Charles Bitterbaum at 10:00 AM