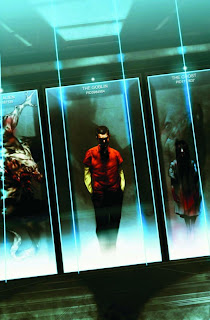 Osborn #2
This mini-series became my favorite one coming out based on the first issue alone, and I now see that I was not wrong in thinking this comic was great.


Kelly Sue Deconnick writes a great Osborn and Emma Rios draws a great comic. These two have made something crazy-good. Whether it is the terse exchange between Osborn and the "priest" or an amazing spread where the art turns all red and sprawls around in an intentionally bizarre and confusing way to make us feel like a character who is going mad (genius), this is one great comic.
This is without even mentioning a scene with the prisoners and a guard that gets across just how dangerous these new characters Deconnick introduced are. The only bits that aren't completely awesome are when Norah Winters--a reporter investigating Osborn--is featured. I see how she is going to play an important role in the story, but I find her a bit annoying. The thing is, I think she is supposed to come off as brash and testy, so Deconnick does a great job even with her. This comic apparently ties in loosely with the Spider-Man comic, but I haven't been reading that and followed everything just fine, so that's great too. 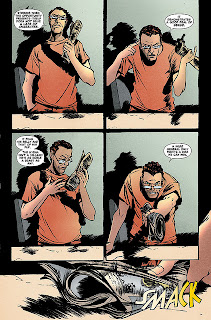 In closing, issue #2 of Osborn has great writing, art that looks amazing whether a character is talking or taking action, and otherwise rocked my socks off. You should definitely be reading this.
5 out of 5 stars.
Posted by David Charles Bitterbaum at 2:20 PM