Rant-Reviews--How the hell do people genuinely enjoy Tarot: Witch of the Black Rose? Plus, some super-hero comics.

More Luthor, two books with Luke Cage, and what's this--Tarot: Witch of the Black Rose? Am I crazy?

Action Comics #897
I had expressed my hesitance to review this after Comics Alliance did such a great job, but I decided I would throw in my two cents and encourage people to buy this comic because Cornell has been doing such a stellar job. This issue is almost entirely just a conversation between the Joker and Lex Luthor, but I'll be damned if it isn't amazingly done. Joker's crazy nature mixed with Luthor's cold pragmatism makes for an interesting mix, and seeing these two characters play off of one another just makes for great reading. Plus, the overall plot thickens in Luthor's quest to make sense of the dark energy he's been tracking down, with it becoming ever clearer all is definetely not what it seems. This has been some great stuff and it is only getting better. Read this comic!
4.5 out of 5 stars.

Thunderbolts #152
While the above Action Comics is almost all talking, this is pretty much all-action, and boy does Kev Walker draw some great-looking fights between the team and the Godzilla-sized monsters they take on to protect Japan (that country just can't catch a break when it comes to giant beasts). Jeff Parker picks up on a plot-point from his Hulk comic to give the team an excuse to go on their trip, and throws in a new member in the form of one of the numerous versions of Hyperion that exist throughout the multiverse. The question however, is if this is one of the good ones or evil ones. How this Hyperion got to the Raft is actually shown in another comic, the "Age of Heroes" mini-series that had a short tale with Blue Marvel--but this comic just mentions the fight and not the issue. An unimportant, but fun fact for you continuity nerds out there. While it looks great and introduces some interesting new wrinkles in the plot, this is still pretty much just action, so I wouldn't mind more of Parker's great dialogue and plotting in the next issue.
3.5 out of 5 stars.

The New Avengers #8
It is not a secret I love both Jessica Jones and Luke Cage, so while some people might be bored by 7 pages of them just chatting before the action kicks in, I loved it to death. If the rest of the comic matched that opening this would have been quite the winner, but sadly the fight that ensues with Doctor Doom (not a spoiler, he's on the cover) and the surprise in the fight that I had predicted as soon as the battle started isn't as impressive. Daniel Acuna does decent art, but I've just never really loved it, only liked it. Plus, if you bring Doctor Doom into a book that just introduced Squirrel Girl and don't have her fight him, you must be crazy! She is one of the few heroes who can take him down single-handily--I do not kid, the man is scared of her: 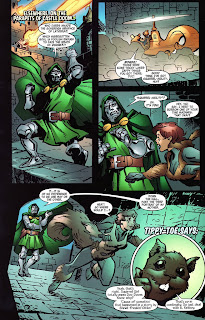 Otherwise, this is a solid issue, even if some cryptic things said by the New Avengers liaison Victoria Hand hints that there is more to the story than what has been revealed so far. For some reason I'm thinking this may tie-in with Fear Itself even though there is no indication it does--or maybe the deal with Doom will be its own story contained here in New Avengers, we will see. Overall a good, if not great issue, though that opening with Cage and Jones bumps it up for me at least half a point.
3.5 out of 5 stars.

Tarot: Witch of the Black Rose #66
Jim Balent's famous T&A filled comic that inexplicably has a huge female readership (must be all the Wicca and witch talk), which in the last few issues has actually toned down the nudity that Balent usually doesn't hesitate to unleash (the link is appropriate, its just Comics Alliance making fun of how silly this comic is with anything offensive having a black-bar over it)--seriously, these characters always seem to lose their clothes in a battle or something. As I start wondering if Balent has decided to be more tasteful I am greeted by a page in the comic telling me how I can, "Read 3 pages of issue 64 [I think they meant 66] that were too intense for print," for just $4.99 a month, and I get to read old back-issues online and get "free" pin-ups. Wow, really Balent, now if people want to enjoy the main focus of your comic they have to pay $4.99 for the saucy drawings as if you were a porno site? That's just cold man. Oh, as for the plot there is something to do with Thor and the trickster God Loki (with it carefully pointed out they are not the Marvel comics version so Balent doesn't get sued), along with some well-drawn scenes of magic-fighting because when Balent isn't busy drawing huge bust sizes he actually is a pretty good artist. Still, why do I read this comic again? Oh yeah, I used it for a project about the portrayal of female sexuality in comic books and just can't stop reading it because its so bad its good, although lately without being as silly as usual its just bad. I mean, it's at its best when crazy stuff like this occurs: 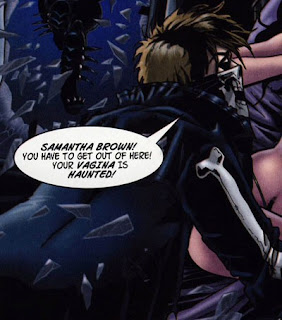 Yeah, that really happened in an old issue.
1 out of 5 stars.
Posted by David Charles Bitterbaum at 1:22 PM