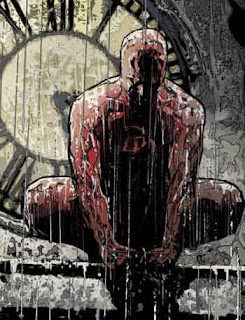 Let's get this out of the way, the parts of Daredevil's run by Bendis that most remember and love doesn't really start until issue 26, when the whole "Kingpin is attacked" scene happens. Also, if you don't read the first Daredevil book by Kevin Smith a few things might not make sense, e.g. why the Kingpin is currently blind, who Karen Page is/was, and a few other things. However, when I first read this run I had the same problem, having not read earlier issues, but I still followed along fine. What made this run so great however? Well, Bendis took the concept of a secret identity and did something shocking, he outed Matt Murdock as Daredevil. If you think about it, it made perfect sense. The Kingpin knew who Daredevil was, the Kingpin's crew knew, various other people knew, his identity was essentially an open secret. However, when someone spills the beans and all hell breaks loose, it is something to behold. 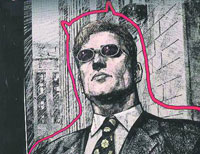 As I always say, Bendis is at his best writing street-level heroes, and this is his shining moment. The dialogue feels fresh and real, fan-favorite characters like Luke Cage and Iron Fist show up, Daredevil fights super-villains and mafia toughs. It's just great fun. There is also introspection about if Daredevil is really sane, and a new love interest is introduced. Plus, my God, Maleev's art is just beautiful: 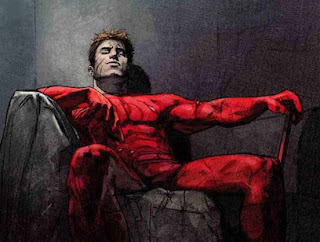 The highlight of the comic has to be when Murdock realizes how sick he is of the game he and the Kingpin always play, and comes inches away from murdering Bullseye while revealing the character's origin to be embarrassingly simple, before beating up the Kingpin, throwing him through a window into a bar, ripping his mask off, and declaring himself to be the new Kingpin of Hells Kitchen. That was awesome, and after the build up to that you think it couldn't get any better, but that just kicks off when shit gets real. 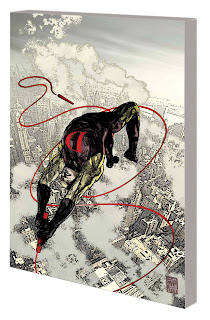 After that amazing issue the comic took a bit of a break from Daredevil and six issues featuring Echo came out. Those were decent and all, but thanks to the collections we can skip those six months that were so painful waiting to see what happened next. And what did happen next? The comic jumped ahead a whole year, to a Hells Kitchen where people felt safe, and everything was going great because Daredevil didn't stop until every lick of crime in his part of the city was gone. It would be dull if things stayed that way, however, so before too long Murdock is dealing with Yakuza, the original Kingpin whom he took down long ago (as rendered amazingly by Maleev in flashback scenes that look like actual comics from the past), and the risk of papers that reveal unquestionably Murdock is Daredevil. Not to mention he secretly gets married, helps Nick Fury and Black Widow with international intrigue, and otherwise acts awesome. Yes, this is an amazing mega-arc. 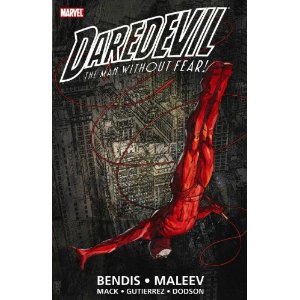 This is one of the comics that got me actively reading comics again those years ago when it first came out. I was looking over comics and saw that cover of Murdock being outed as Daredevil, and just kept reading. The only thing is that Bendis' run ends on a big cliff-hanger and you need to pick up Brubaker's run on the comic to see the also great comics that featured Daredevil in prison. Pick up the ultimate collections or omnibuses if you have a bunch of money, and trust me, you will most likely love this comic. It is arguably the best Bendis comic there is besides his run on Alias--which actually ties in slightly with this comic, so you could say they both were part of one big story. Just read this, whether you buy it, get it from the library, or bum it off a friend. It's truly masterful stuff.
5 out of 5 stars (for the overall run).
Daredevil by Brian Michael Bendis & Alex Maleev Ultimate Collection - Book 1

Buy at least the first and if you don't get hooked I'll be surprised.
Posted by David Charles Bitterbaum at 4:00 PM