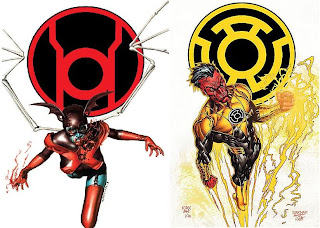 Corps and Emerald Warriors make up two of the three regular Green Lantern books coming out regularly (with "Green Lantern" itself being the third). One issue does a nosedive in quality, and the other increases with both meeting at the middle ground of mediocrity.

This is sad, "Green Lantern Corps" was really starting to be a fun read again since Tomasi left it for "Emerald Warriors. I enjoyed seeing Sinestro and his Corps fighting the Weaponeer...but that pretty much was the entire comic. A fight scene. A decent-looking fight scene, but nothing else. That's just annoying. Maybe it is the new smaller page-count, but I didn't think I would miss two pages so much.

Meanwhile, Emerald Warriors had been a bit below-average for me, seeming to meander along, but suddenly it picks up the pace immensely this issue. Bringing secrets out into the open, making the goals of the weird three-eyed bad guy more apparent, and advancing the mystery of just what is up with Sodam Yat. It also picks up the shared plot-thread running through the books about Guy, Ganthet, and Atrocitus teaming up to fight a dark future they have seen in visions. This increase in pace makes me feel this comic is now at least about average, but it still isn't as much fun to read as Corps normally is.

Overall both issues were pretty much serviceable, with neither doing anything too impressive. Oh, and they both had a bunch of pages in the back with an excerpt from the upcoming DC comic set in the new online video-game universe, which looks slightly interesting. I am not playing the game though, so the chances of me actually following the comic when I already don't read too many DC titles is pretty much nil. Still, it almost makes the comics feel like they are giving you more story for your $2.99, which is nice.
2.5 out of 5 stars (for both).