2 random issues of a comic: Avengers Academy #6 and #7 Avengers Academy #6 and #7
Christos Gage tends to write good books. I liked his Stormwatch: Post-Human Division Comic (the first work by him I encountered) and really enjoyed Avengers: The Initiative. How has he been doing with Avengers Academy, though? Let's check in on the latest two issues. Why those two? Why not?

Issue six continued the trend of hearing the thoughts of one of the students, this time focusing on Reptil. He was the only student character to appear in another comic before this series (a one-shot written by Gage, natch), so I am slightly familiar with him. I like the whole theme this series has been going for with the "These students are most at risk of becoming villains" story, and seeing Speedball/Penance is always a kick, I grew to quite like him during the short New Warriors comic that led to Civil War: Frontline, his term on Thunderbolts, and the snazzy Penance mini-series that tied in. Sadly Penance doesn't get too much time this issue, but hopefully one will come soon. Anyways, we see into the mind of Reptil and how unhappy he is knowing the truth about how the Avengers fear him and his fellow classmates, but how he wants to be an Avenger: 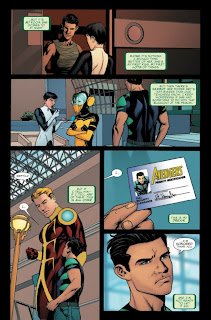 Meanwhile the team deals with becoming media-stars--thanks to some secret actions taking by Stryker to get them press--and Jessica Jones makes a guest appearance! I was quite surprised and pleased to see her pop up. Overall issue six is quite enjoyable and should be a good bookend to the first trade, which I assume will be issues 1-6.

Meanwhile in issue seven, Tigra seems to already have had her baby even though back in Dark Reign she was just pregnant. They seem to try to write this off by saying cat-people grow quickly, but it doesn't matter that much as Tigra and Hank Pym make a cute kid--even if an evil alien with his DNA made the baby (never thought I'd say that sentence): 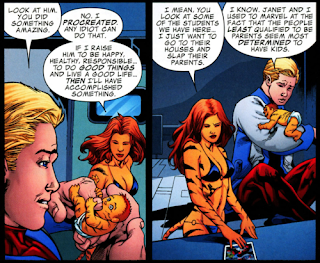 We also have some fun bits of story with Hank Pym wanting to bring back Janet with some sci-fi shenanigans, and of course the kids put in an appearance helping transport a convict who escapes resulting in this happening: 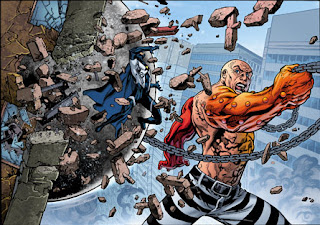 , it's worth reading.
Posted by David Charles Bitterbaum at 10:00 AM