Not As Good As I Hoped For: Invincible Iron Man #500 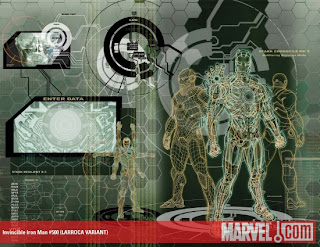 
Instead of the great story that has been running in the main Invincible Iron Man series, we get this tale of  Tony Stark trying to figure out what weapon he had been working on before his mind-wipe that apparently holds the potential to destroy the world. This inter-cuts with a future where such a weapon has actually been created by his arch-foe the Mandarin. I read this would relate to the Invincible Iron Man Annual from last year, but the only link I saw was how the Mandarin appeared in the future scenes. 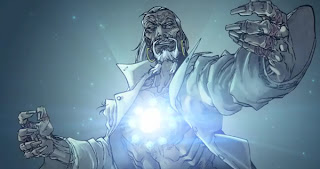 Oh, and Spider-Man shows up because Tony Stark had been working on his designs for this weapon with Spider-Man's civilian-identity, Peter Parker. The story is as I said, decent, with regular artist Salvador Larroca drawing scenes in the present, and almost manga-styled art for the bits in the future. We also get a preview of the upcoming "Iron Man 2.0" which will star Tony's longtime ally James Rhodes. Oh, and we get  a bunch of pages serving as a cover gallery for all the past issues of Iron Man that led to this one. 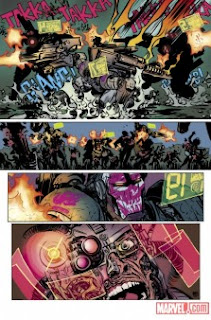 As I stated in the beginning, I expected something great and instead was a bit let down by only getting something good. I hope the next issue, 500.1 (God, I find this whole .1 business silly) picks up the main story Fraction has been writing as a sort of mega-arc from his first issue. A $2.99 Iron Man comic that is good would be worth buying, a $3.99 good Iron Man comic would be worth buying, but a $4.99 comic that isn't great? Ehh....I might have passed on this--but again, I'm not grading on price. If I were, you could take off maybe another half-point.
3 out of 5 stars.
Posted by David Charles Bitterbaum at 12:00 PM