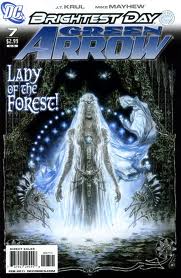 J.T. Krul had the disastrous "Rise of Arsenal" mini-series he wrote, and then started up this new Green Arrow ongoing after Oliver Queen was tried for murder because he killed a super-villain who demolished a bunch of Star City. Queen was found innocent but banished from the city by a judge (can they do that?). He then stayed in Star City anywaysc and lives now in a forest that grew from the debris due to the Brightest Day event this comic somewhat ties into. Is the comic good? Well, it isn't as bad as "Arsenal".

The first six issues of this series were okay. There was some intrigue, action, a weird guy who claims to be a knight from the past, that sort of thing. However, in this issue just not much happened. Oliver Queen has a dream about the past, fights some bikers, sees a ghost that might be his mother, and goes home. Even the ghost doesn't make stuff exciting, and the plastic-looking art doesn't help: 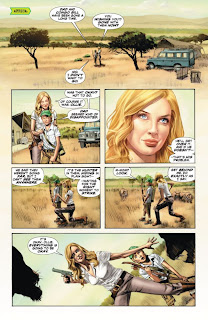 I don't have much else to say...this just isn't that good. I started reading this because I like Oliver Queen, but Krul just hasn't been doing much for me, and if we continue with this new unattractive art by Mike Mayhew I really think I will drop this.
2 out of 5 stars.
Posted by David Charles Bitterbaum at 10:00 AM