That was wretched: Ultimatum.

Ultimatium TPB
People said it was terrible, that Jeph Loeb was writing lame comics and this was his masterpiece of miserableness. I like the art of David Finch though, so it couldn't be that bad, right? How little I knew.

There goes 20 minutes of my life spent reading this in the book-store that I'll never have back. Let's get this out of the way, the one thing that makes this not utterly useless is David Finch does some pretty art. However, when Loeb has you drawing the most disgusting things possible, that doesn't really make up for it. Seriously, we have a page of The Blob eating Janet Van Dyne (The Wasp) and remarking she, "Tastes like chicken." I'm not joking: 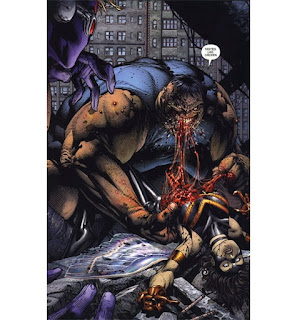 Oh, and Dr. Strange gets squeezed to death by a demon, Magneto gets his head vaporized by a laser, and Cyclops has his brains fly out across the page from a bullet. I don't mind when a comic is violent, if it fits the story, but this is just absurd and hideous. David Finch draws some pretty-if-disgusting art, however. 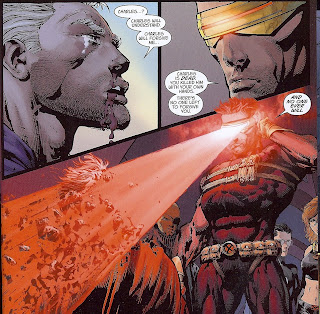 Jeph Loeb just wrote a pretty poor comic here. It's over-wrought, and full of people talking in all capital-letters to express how serious and angry they are, or outright stating how they are angry to make sure the point gets across to the reader--having your characters screaming about how they feel is the worst kind of dramaturgy. I don't like it when people just slag off a comic writer or are outright mean--fanboys and fangirls tend to be way too harsh--but pretty much all the criticism this book received was well-deserved. 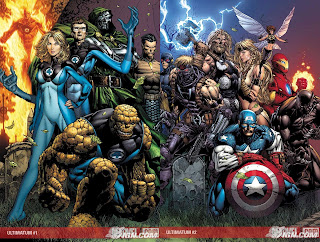 David Finch went to DC exclusively shortly after doing this comic--a few more Marvel things came out with his work, but this was his last big project--and a part of me wonders if he was so miserable illustrating this terrible comic that he left Marvel. Pretty unlikely, but it would make a great story. The art saves this from being the worst thing I've ever read, but that's about it.
1 out of 5 stars.
Ultimatum

, if for some reason you actually want it. Seriously, don't buy it.
Posted by David Charles Bitterbaum at 10:00 AM