A Fun Time: The Taskmaster mini-series. 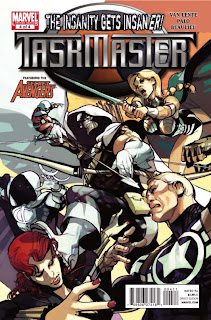 Taskmaster #1-4
This comic was fun, made me laugh, and had some heartfelt moments. One big twist kind of bugged me though, and even though I avoid saying spoilers in reviews, I'm going to reveal this one, as the spoiler itself affects my score. You have been warned...


This comic had some hilarious moments. From the Mexican-themed villain who is really a white guy doing a bad impersonation of a Latino accent, to the biker gang made up only of space-aliens. Fred Van Lente almost always makes comics I enjoy, and this is no exception. When you have a town that drank tainted water to a point where they all think they are like Hitler...well, you've got some twisted genius. From the opening action scene at the start of the comic where every bad-guy organization made by Marvel ever attacks the Taskmaster, to a high-speed battle atop the bus with the aforementioned faux-Mexican villain. The art is quite nice thanks to Jefte Palo, whose work I don't think I've ever seen before but liked here. Plus, this is one funny comic, as evidenced by the scene below (click it to laugh): 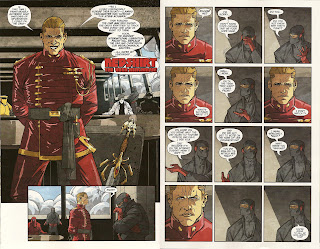 The thing that bugged me was the twist. Namely, that Taskmaster has been working for the good guys all along? Really? Another one of those "Everything you know is a lie" style twists? Plus, his wife has been the waitress tagging along with him all along? Okay...I'll roll with it, but only because the script is otherwise so good. Still, the sheer incredulity I feel makes me like the comic just a bit less because I get tired of people trying to be shocking by re-writing a character's whole history. Maybe I'm just whiny, though. Regardless of that complaint, this is still a really good comic and I had a great time reading it.
4 out of 5 stars.
Taskmaster: Unthinkable

if you want to enjoy yourself.
Posted by David Charles Bitterbaum at 12:00 PM