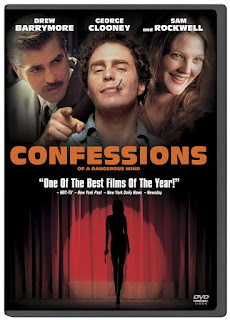 Confessions of a Dangerous Mind
Chuck Barris claimed in his book that while being behind the creation of numerous game-shows and host of the Gong Show, he was also secretly an assassin for the US Government. In George Clooney's directorial debut with the sublime Sam Rockwell as Chuck Barris we see just how much intrigue and drama a man can take.

When I first saw this movie in theaters in 2002 I loved it. It did okay in theaters but I think that was because people had a hard time classifying it. Was it a really dark comedy? An autobiographical drama with a faux-documentary twist? A psychological spy-thriller? Whatever it was, George Clooney made a film that is just dynamite! Drew Barrymore does a great job as Rockwell's love-interest, Penny. Julia Roberts does an actually decent job in her role (I hate her usual films where she plays a mother with a heart of gold, or a hooker with a heart of gold, or her latest film where she plays a traveler with a heart of gold) and Clooney pops up too. What exactly is the movie about? Well, game-show host Chuck Barris claims that while he was behind the creation of various popular television shows he was also killing people for the American Government during the Cold War. How he enters this role, and the twists and turns that ensue (a possible mole in the agency wreaks havoc) make for entrancing viewing. Not to mention this film has some hilarious moments. Most of the humor comes from Rockwell's great job as the ego-fueled young Barris, whom we see go from cocky to humbled and barely at the edge of sanity as the film progresses. 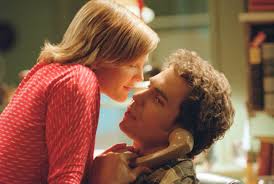 I can not over-state how much I love this movie. I count it among my favorites, up there with Anthony Hopkins and John Hurt in "The Elephant Man" or David Spade in "Joe Dirt" (Yes, I have very odd film tastes, but to be fair I love one because it's so good and the other because it's so bad). Rent it, buy it, whatever, just see it.
5 out of 5 stars.
Confessions of a Dangerous Mind for the movie, though there are books too.