This was an interesting twist on the character: Deadpool Pulp.

Deadpool Pulp #1-4
This was an interesting take on Deadpool. Mike Benson and Adam Glass write a slightly dark version of Deadpool, keeping the current theme of his having two voices in his head, but adding a third that is the voice of reason and calm. Laurence Campbell turns in some great art, even though the flow of action can be a bit confusing at times. How is the comic overall though?
That was...different. For a comic with Deadpool you expect something funny, and while this has bits of humor, it is very dark, like pitch-black comedy. The normal Deadpool definetely had some bad things happen to him, but he is a wise-cracking fellow trying to be happy. This noir/pulp version embraces the darkness that envelops him and results in someone who is miserable and has a dark view of humankind--with a glimmer of hope, but just a slight bit. The art also keeps a dark tone with its color and hue: 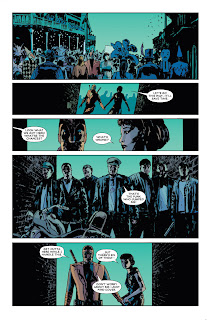 Some familiar faces pop up in new forms, a general Stryfe, and a soldier named Cable who has close ties to Deadpool--like in the normal Marvel comics, and our femme fatale is the recognizably named Outlaw. I went into this expecting to laugh, but instead got a comic that was a moody, complex spy-thriller full of twists and turns.

This was a good comic, different than what I expected, but intriguing nonetheless. I would recommend checking out these issues or waiting for the hardcover/trade.
4 out of 5 stars.
Deadpool: Pulp #1

if you don't mind waiting till March for the hardcover.
Posted by David Charles Bitterbaum at 10:00 AM