A Crossover I Actually Am Pleased About: Secret Six #29 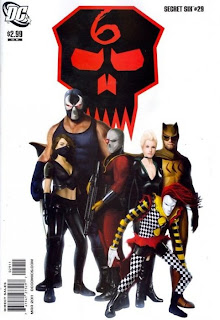 Secret Six #29
For the conclusion of the story in Action Comics #896 (with this taking place before #897), I had to pick up this issue. However, I sure didn't regret doing so.

Wow, that was pretty cool. Gail Simone--who is quite a great writer--picks up Cornell's story-line from Action Comics that crosses-over with this Secret Six and does a great job finishing this part of the story while putting in some of her own unique style so as to compliment what Cornell has been doing without going so far as to make it glaringly obvious this was written by someone else. 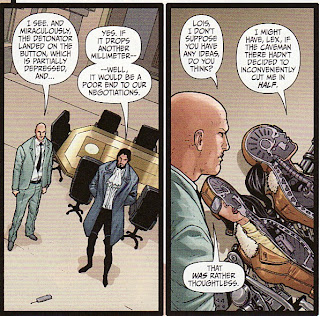 I admit I have no clue about who the Secret Six is, but the last issue of Action Comics and this issue of Secret Six fill me in enough that I had no trouble following along. The humor from Cornell's book is still present here, along with the zaniness that has made Secret Six a fan-favorite comic (even if I don't read it due to not following too much DC work). Another risk with a cross-over is that the art-style can change so dramatically as to be jarring, but Marcos Marz does a great job keeping the style Pete Woods uses over in Action Comics.

This was great fun and serves as an example of a cross-over between two comics done right. My only concern would be that when Paul Cornell's story in Action Comics is collected, whether this comic will be included as it is pretty integral to the overall story. Also, I have no clue how Secret Six can be ordered without including the Action Comics issue or just leaving this one out, as otherwise the story would make no sense at all--so is the problem with cross-overs.
4 out of 5 stars.
Posted by David Charles Bitterbaum at 10:00 AM