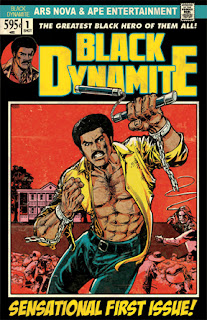 Black Dynamite #1
There was a very funny movie that parodied blaxploitation films that came out a couple of years ago called, Black Dynamite. It had the talented Michael Jai White (who has a writing credit for this along with a bunch of other folk) as the titular hero, an ex-CIA operative and Vietnam veteran who fights against the man and solves a big mystery. It was a really funny flick and had some great kung-fu fighting. So, when I saw that Ape Entertainment had an officially licensed one-shot you know I was going to pick it up. Would it live up to expectations however? Yeah, I would say it pretty much did.

I've said that Afrodisiac was sort of what Black Dynamite would be in comic form, and now Black Dynamite is in comic form, making it interesting the way the world turns. This is a fun tale in which Black Dynamite investigates an island where black people are still treated as slaves and an evil old white man owns, "Slave Island" and tourists come to relax and enjoy the way things, "used to be." It's all very over-the-top just like the movies, and of course Black Dynamite doesn't stand for it and takes the whole operation down with a vengeance. The art is good, looking like a snazzy silver-age comic (of course the swearing makes it clear it isn't) and the comic is both action packed and humorous in its zaniness. 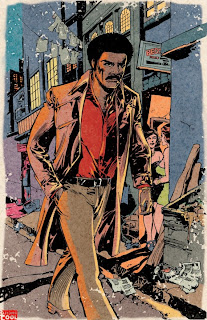 This was a fun read and if you were a fan of Black Dynamite, enjoy humorous comics, or like things that poke fun at blaxploitation flicks while also paying them homage, you should enjoy this.
3.5 out of 5 stars.
Posted by David Charles Bitterbaum at 2:00 PM