Time to look over what looks horrendous in this month's Previews. Interestingly enough, I didn't spy anything new that was damaging to the eyes from Marvel aside from the usual stupid zombie comic, but DC seems to be pulling a lot of bone-headed moves this month--also, wasn't this the third month with Flashpoint advertised on one of the Preview's covers? Another interesting twist was that there wasn't too much in the back-section of Previews I found terrible, it was pretty even between it and DC. Sometimes the more questionable back items really overtake the front things. Alright then, let's get to mocking stuff. 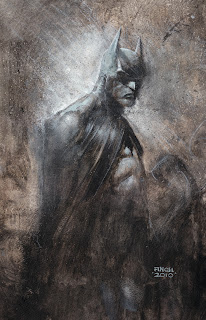 Pg. 104, Batman: The Dark Knight #4, $2.99
Let me make sure I've got this right; DC hired David Finch to work for them exclusively because he is such a great artist. They gave him a Batman book to just draw whatever he wanted. He was taking so long to do it they hired a fill-in artist, but Finch is still writing the book, because that is what you read a David Finch book for, the writing. 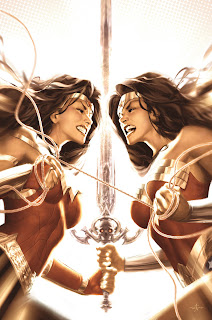 Pg. 110, Wonder Woman #613, $2.99
Apparently this has just been a huge aberration, trying to re-write Wonder Woman's continuity, before pulling a, "oops, just kidding!" and now seeming to have it be different reality Wonder Women fighting or something? I really don't know, I just liked how the solicit said, "Even if she wins, she loses," because either way the reader loses--they shelled out the money for this. 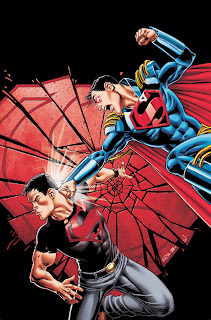 Pg. 114, Teen Titans #98, $2.99
I was pretty much the only person who kind of liked Superboy Prime, finding him sort of funny and interesting in a, "What a brat!" sort of way. However, even I started to grow sick of him when they finished using him in the Final Crisis spin-off and his brief appearance in Adventure Comics during Blackest Night. Therefore, if I'm tired of him, this has got to just completely piss off everyone else to see he will be back for this comic. Just leave the character alone for a few years, or forever, I'm really pretty done with him. Imagine if Superman were as much of a pain... 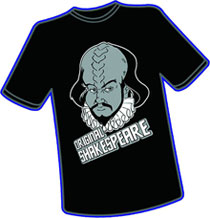 Pg. 227, The Original Shakespeare T-Shirt, $20.95-$21.95 (for a XXL size)
From Antarctic press, who are almost as bad as Bluewater (which we are getting to), we have this t-shirt, which is of Shakespeare, if he were Klingon...okay? I don't get what Shakespeare has to do with Star Trek. Am I missing something? The text advertising the shirt doesn't help explain it either, so this just seems to be the strangest most pointless mash-up imaginable, like taking two random things that don't work and trying to put them together--not to be confused with two random things that do work, like peanut butter and jelly, who would have seen that being tasty? 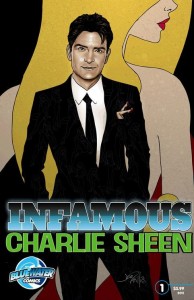 Pg. 252, Infamous: Charlie Sheen, $3.99
It's official, Bluewater comics has sunk as low as it is humanly possibly for a comic company to sink, of that I am pretty sure. I mean seriously, they are going to put out a Charlie Sheen comic where they say how they are going to examine everything in, "excruciating detail," and, "TMZ, eat your heart out," really? They go as far as to say he is currently the most fascinating person on the planet. That has got to be one of the most offensive and stupid things I have ever read. Charlie Sheen is a sideshow attraction right now and his main appeal is the sick fascination people have watching someone have a mental breakdown right before their eyes.
The best part is Bluewater never pays any of these people for their bio comics so when Sheen's brief time in the media spotlight is up there won't be any royalties from this comic. Hell, when this finally comes out his fame may be gone and they'll just have to pulp all the unsold copies. On a side-note, there is an interview with Adam West for one of his comics from Bluewater where he says how he is impressed with their creative team and vision. This has convinced me that Adam West smokes crack. 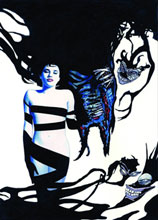 Page 314, Shame Volume 1: Conception, GN, $9.99
I'm not sure this sounds horrible so much as it does utterly insane. A woman named Virtue wishes for a baby and demon named Slur, "magicks a quickening of her womb," which results in the birth of a baby named Shame which is imprisoned or something. What. The. Hell. This might not be atrocious, but the names and that whole line about "quickening," make me think a high-schooler obsessed with demon-stuff wrote this. I mean, you name the characters Virtue and Shame? Really? I'm sorry, as I said, this may be great, but I'm thinking it also might suck. I'm kind of curious and if I somehow read it and love it I'll add a link to my positive review. Seriously though, a quickening.


That's what made me go, "Ew." As always, feel free to buy what I said looked horrendous to me, because for all I know you may love it, but you have been warned.
Posted by David Charles Bitterbaum at 10:00 AM