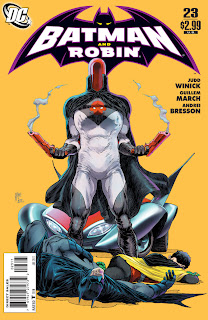 Batman and Robin #23
This comic does something you don't think is possible, it makes Jason Todd, the former-Robin that everyone has hated, actually look kind of cool. No, seriously, the former whiny-brat who was unbearable in Countdown to Final Crisis and went completely bonkers in Battle For the Cowl before being locked up in the earlier issues of Batman and Robin kind of is a bad-ass in this issue. How is that possible? Let me explain...
Judd Winick loves the character of Jason Todd. Everyone hates Jason Todd, but Judd Winick would be the president of a fan club for the character. He did a mini-series explaining how Jason Todd came back to life, trying to brush-off the absurd aspects--e.g. Superboy-Prime punching the walls of reality (seriously)--and play up the, "dangerous anti-hero" angle. Well, Winick gets his chance to write more about Todd in the now eternally-rotating creative-cast Batman and Robin comic with an arc focusing on just what happened to Jason Todd after he went to Arkham at the end of the Grant Morrison-penned issue #6. Basically, Jason Todd is getting transferred to a regular prison because he has proven he isn't crazy, just dangerous. The Bruce Wayne Batman knows something is up and the Dick Grayson Batman along with Damian say they'll keep an eye on it. After that this sort of becomes a cool prison-comic with all the convicts mysteriously committing suicide before it becomes apparent Todd is behind it. The reason I like the comic though is that Winick writes Todd very well, with a cool wit and a dangerous demeanor that isn't bratty or over-the-top, but just right. 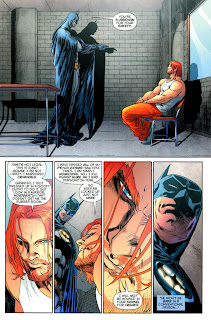 I was surprised that I enjoyed this comic to the degree that I did, having been annoyed so much by Jason Todd in some past comics. I guess if you get a writer who actually likes Todd and wants to write him well, you'll get a good story out of the character. Plus, how cool is that cover that riffs/parodies the first issue of this series? I just love that. Anyways, I am interested to see what happens next after the strange ending this comic has, and the next two issues this arc contains are bound to at least meet that interest.
3.5 out of 5 stars.
Posted by David Charles Bitterbaum at 12:58 PM