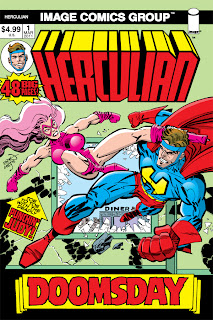 Herculian #1
Erik Larsen turns in a 48-page pseudo-anthology (anthology in the sense it is different pieces, but not really one because it is all Larsen), of his "24 hour" comic and some other stuff. It's an interesting mixed bag o' comics.


The main piece, which he made in 24 hours (but later colored-in) is a pretty good work by Larsen. It's about two guys discussing one falling in love with a woman and asking his brother to be the best man at his wedding. There is a super-hero fighting an evil lady-villain too which has some allegorical moments. It looks pretty good and reads well, with a nice little twist at the end. 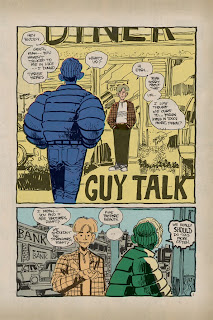 There are also some pieces that Larsen had in the "Popgun" anthologies, such as his Cheeseburger-Head comic which is pretty humorous, some one and two-page gag strips, a super-hero named Carl Cosmic who is really bad at being a hero, and "Reggie the Veggie". Reggie the Veggie is just a strip of one man who never moves as various things happen around him. Oh, there is also a piece that also will probably offend countless people and which I found pretty tasteless. "Micky Maus," which is as bad as it sounds.
Overall it is a pretty good read even if I really didn't like that offensive piece at the end and imagine Larsen might get some flack for it from various people--holocaust jokes just are kinda crass, man. Other than that I generally had fun and would say it is a fun read, plus at its "golden-age comic" size that is sort of snazzy too, making all the art much bigger. I'd say to check it out.
3.5 out of 5 stars.
Posted by David Charles Bitterbaum at 7:00 PM