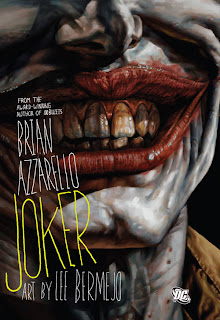 Joker
An original graphic novel that was released by DC comics as a snazzy-looking hardcover, this out-of-continuity tale focuses on a much more real-world version of Gotham where the Joker one day gets released from Arkham Asylum and tries to rebuild his criminal empire--all viewed through the eyes of a young Johnny Frost. It's written by the talented Brian Azzarello who knows a thing or two about crime-comics, and has beautiful artwork by Lee Bermejo--who does all the pencils but unfortunately doesn't ink every page. Oh, it is also relentlessly dark in tone and about as close as you can get to a Vertigo comic with DC super heroes. I really like it.

Brian Azzarello and Lee Bermejo have worked together before on their tale of Lex Luthor--which was recently re-released as just, "Luthor," with additonal pages, and this is somewhat like that in the sense that it takes a popular villain in the DC Universe and tells a tale focusing on them. Plus, with it not in continuity a lot of liberties can be taken that aren't possible in normal comics--such as switching up characters and their histories or personalities (the Riddler in this tale is actually cool). This tale is about a Joker who isn't necessarily crazy, but still dangerous, destructive, and full of so much hate--with an obsession for his foe we don't even see until the end in a bit of a purposeful anti-climax, the Batman. This isn't too much about Batman however, it is arguably about his opposite and the elements that make up a city that would require someone like Batman to exist. In other words, this Gotham is a violent, miserable place. 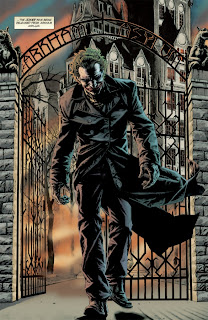 The tale starts out dark and just gets pitch-black, you aren't going to read this if you want something cheery, but boy is it a good story. It isn't really a super hero book, it's a crime comic with heavy noir influences that happens to have a hero who shows up at the end--before that end, this is pretty much a really good yarn about crooks who happen to have some odd deformities or paint on their face. Speaking of paint, Lee Bermejo's painted-ink style is utterly beautiful and the pages that he both pencils and inks are something to behold--with it being very sad that he doesn't do that for all the pages, with Mick Gray providing inks for a good chunk of them. Even those pages look good, but when you get the full Bermejo treatment, you'll go wow. 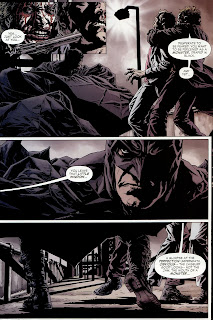 I haven't said too much of the actual plot in this story because I purposely don't want to spoil it as I sometimes do with my comic reviews where I break things down. You pretty much know throughout the whole comic a big confrontation with Batman is coming, but it is everything that happens before that where you see into the psyche of a man like the Joker and a naive young criminal like Johnny Frost where the book really shines. I'd highly recommend picking this up as you don't have to know anything about the comics continuity to enjoy it--you just pretty much need to know that Batman is a good guy and that the Joker is a dangerous criminal. So yeah, read it!
4.5 out of 5 stars.
The Joker

if you want it (Amazon inexplicably adds a "the" to the title).
Posted by David Charles Bitterbaum at 8:00 PM