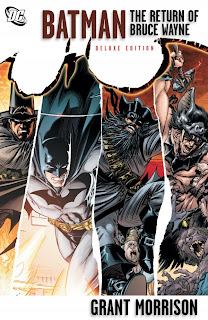 Batman: The Return of Bruce Wayne
It was meant to sync-up with issues of Batman and Robin which were also being written by Grant Morrison but due to delays, this book wasn't able to do so. It had different artists every issue resulting in it always feeling quite different in tone despite being one series, and despite issues such as these, this is still one great series that not only tells a cool tale about Bruce Wayne and Batman, but fills in a lot of the questions Morrison had set up in his time spent on the main Batman book and Batman and Robin.

Yeah, this was overly ambitious in its idea of having a different artist per issue, but I'd say it mostly pays off. Perhaps this is because each issue takes place at such a dramatically different time that it would make sense to have a new illustrator--after all, everything is different. Also, despite Morrison writing this whole series he adjusts his writing style by the period, making the issue with the cavemen have a more prehistoric feel, and by the time we reach the fifth issue we get a good hard-boiled detective tale. Oh, for those who want to know the plot, basically you need to have been reading Batman and Final Crisis to be aware that Batman was shot with Darkseid's weapon known as the Omega effect which has caused him to become lost in time and jumping around to various points in history he then has to fight through in order to reach the present--with of course a few snazzy twists to keep thing interesting.

Each issue has good art, with it fitting the tone of the issue perfectly, so I can't complain about that, and Morrison is of course a master of his craft when it comes to writing so what is to say really? I mean, people on the web break down each issue of this series with annotations about how each bit relates to the overall Batman narrative Morrison has been weaving since starting up on the main Batman book those few years ago! Plus, the story is very interesting with the only main issue being that it really does heavily tie in with Batman and Robin and you are expected to pretty much pick up that series for the true conclusion to this story. If DC ever makes some sort of Absolute collection of all of Morrison's Batman books they will probably alternate the issues from this series and Batman and Robin the way they are meant to be read perfectly, but it isn't too big of an issue as long as you just read both series (of which I am reviewing the main volume of Batman and Robin that relates to this series in the next post). 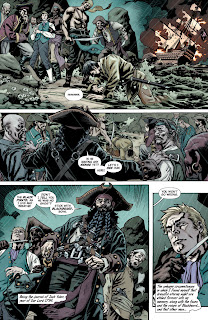 Could you enjoy this without knowing all the minutiae of Batman that Morrison has been conjuring up? I suppose, but it really helps to know just who this Dr. Hurt character is that keeps popping up, and why its a big deal when the Black Glove is discussed in issue #5. If you just want a good time-travel yarn that involves Batman though, you could still check this out though, yes, it just might be a bit confusing.

I greatly enjoyed this book, finding that as each issue progressed I liked the series more and more as Morrison kept just making things even more interesting and complex (but in a good way). He ties in his work on Batman, the overall mythos of the character, his usual topics of time and reality being fragile, and otherwise makes something multi-layered yet also understandable. It's sweet stuff.
4.5 out of 5 stars.
Batman: The Return of Bruce Wayne

should you want a good read.
Posted by David Charles Bitterbaum at 2:00 PM