Flashback Friday--DMZ Volume 1: On The Ground 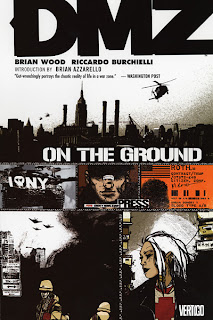 DMZ Volume 1: On The Ground
Interesting story about how I got this: it was essentially the last thing I have bought from a Borders and it was pretty much free. You see, the book normally was $10.00, but was being sold for 50% off at the last Borders near me that was about to close and I had 5 dollars in Borders bucks. With my borders membership covering the sales tax I ended up having one penny left in Borders bucks that I never got to use. Kind of sad. That is a huge digression from my discussing this book about a possible near-future where the U.S. has another civil war--a book which is very good.

DMZ follows a young man named Matty Roth who was just supposed to be an intern for a U.S. news station (Liberty News) but through various events in the first issue ends up alone and reporting whatever he can to said station. We see this interesting world where some citizens have seceded from the US and the DMZ that belongs to no one is Manhattan--which leads to all kinds of craziness. There is fighting, slice-of-life moments, and a whole lot of political messages, plus the art looks quite snazzy too, with the little info-graphics spicing things up well. 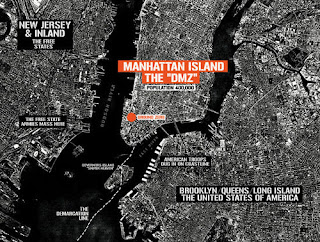 This is an interesting story, made even more insightful by just how fractured and angry our current political climate is--making me wonder how far-fetched it would be for some of the US to want to try and secede. Yeah, it's absurd, but some folk actually talk about wanting to do it. Our main character is an interesting fellow who we clearly only learn a bit about despite having a lot more to his background (as the story hints) and I imagine later in the series readers learn more. The people he meets are pretty cool too and this is just some fun reading. 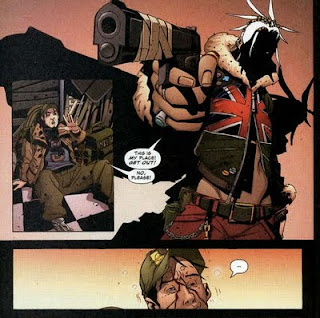 DMZ was recently announced to be ending with its 72nd issue. That is partly the reason I thought it would make sense to discuss it--well, that and how screwed up our politics currently are. Brian Wood always writes some quality stuff so I wasn't surprised that I enjoyed this, and I would have been happy to spend the full price to have purchased it, which is still quite low at just ten smackers. I am definitely interested in where the story goes and may check out the other trades if/when I get the time and cash.
Posted by David Charles Bitterbaum at 3:33 PM