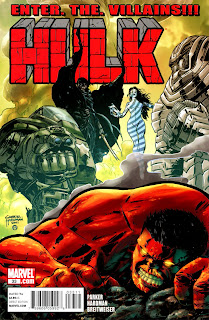 Hulk #33
It's hard to believe not too long ago I really didn't like this series, what with Jeph Loeb making it super-corny and having Red Hulk being a big jerk. Well, ever since Jeff Parker took over it he's made Red Hulk someone much more possible to relate to and understand--it probably also helps that we now know how he's General Thunderbolt Ross--the same man who once hunted down the green Hulk. Gabriel Hardman also has amazing art and the villains Parker has created for the Red Hulk to face are very interesting resulting in a comic I can recommend without hesitation. What makes this issue enjoyable though? Let's discuss it.

This issue has the Red Hulk reflecting on how he's an old outdated piece of machinery, facing some cool new villains, fighting against an evil general, it has a robot that looks like a human getting cut clean in half, and some cool hi-tech stuff like a virus that keeps Red Hulk from reverting into his human form of Thunderbolt Ross when he sleeps. Oh, and it has some cool instances of two different characters talking but their dialogue being somewhat similar and being placed side-by-side so we readers see how it lines up, which is always a cool effect. Plus, as I said, Gabriel Hardman has the kind of art that makes you sit up and pay attention with a, "Damn, that is some really good-looking stuff!" 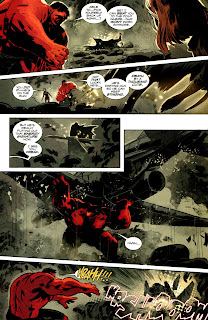 Since Jeff Parker took over Hulk, with Gabriel Hardman illustrating most of the run so far, it has been a solidly enjoyable time--always good, and at times just plain great. Plus, as I said, a robot gets cut in half in the coolest way possible, that just really appeals to my inner-child who loves stuff like that.
4 out of 5 stars.
Posted by David Charles Bitterbaum at 8:00 AM