Book Time--Dear Senator: A Memoir By The Daughter Of Strom Thurmond By Essie Mae Washington Williams 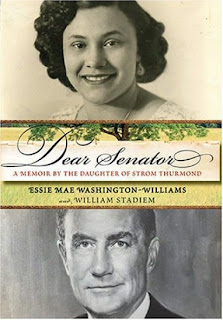 Dear Senator: A Memoir By The Daughter Of Strom Thurmond by Essie Mae Washington Williams
I read this book a long time ago, but it stuck with me as it is a really interesting piece of nonfiction that reads as if it is something straight out of a novel. A state's rights politician who espouses racist ideology has a biracial daughter he secretly cares for and loves? Wow, that's some crazy stuff. Once you get past the tabloid-ish aspects of it all you get into a story that is about really human individuals and how nothing is ever as simple as it seems--especially race.

Strom Thurmond ran for the Presidency against Harry Truman on the platform that integration was bad. When he lost his biracial daughter watched it at home on her television with her husband. Crazy, ain't it? Ms. Essie Mae Washington-Williams never came out as Strom Thurmond's daughter until after he died because she didn't want to disrupt his public life, which is quite nice considering how her father was publicly trying to keep someone like her from being equal with white people. How did he reconcile this? Well, the entire book wrestles with how Ms. Williams had very mixed and conflicting feelings about her father and when she outright confronted him about how he could say such things he couldn't answer her, he could just stand there silently. They had a complicated relationship.

Throughout the book we see the interesting life Ms. Williams has had so far, from childhood where she learns her parents aren't who she thinks they are, to the confusion of adolescence, college, and adulthood. We see how she dealt with the racism of the time and how her life in general went--its all very interesting but the most intriguing parts of the book are indeed the relationship with her father, lawyer, and later Senator, Strom Thurmond. It's fascinating stuff.

This is a great book, it studies the complexities of race, politics, and how people can lead very different lives in public and private. It has moments of humor, sadness, and definitely makes you think quite often. I'd recommend reading it for sure.
4.5 out of 5 stars.
Posted by David Charles Bitterbaum at 11:00 AM