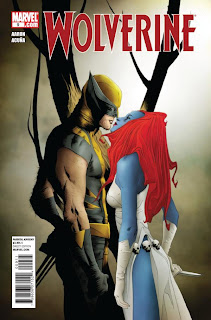 Wolverine #9
We spent eight issues with Wolverine in Hell and then dealing with a demon in his body on earth, so you would expect his hunting down Mystique for revenge to take forever, right? Well, I did, so imagine my surprise when the cleverly titled issue, "Get Mystique: Repose," (which is clever because Aaron wrote the original Get Mystique story in the older Wolverine book) is one short, action-packed issue loaded with fighting, fast-driving, a crazy new assassin, and Daniel Acuna's art actually seeming to work really well this time for me. Yeah, this was pretty sweet.

That weird group from issue #1 still hates Wolverine and has some mysterious master plan to take him down we don't learn about, but I don't mind that slightly dull plot point as this issue they hire a new (I think) character named Deathstrike who never speaks but knows a ton about killing people. The rest of the issue is basically Wolverine and Deathstrike trying to kill Mystique whilst she attempts to tell Wolverine something important. I won't outright spoil the ending, but I was pleased with what happened and how another old foe of Wolverine's (I believe the ninja clan, "The Hand") swoop in to take advantage of it. It's all really good fun and goes by fast but not too quickly that the plot suffers. Plus, Daniel Acuna's art--which I sometimes don't care for--actually seems to work perfectly here, complimenting the car-chasing and fighting very well, so I was very pleased. 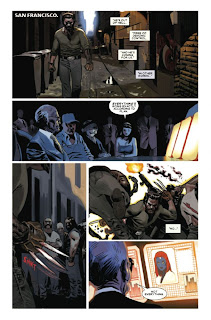 This series has been a bit slow-moving despite being good, so imagine my surprise when this issue resulted in writer Jason Aaron stopping the dragging of his feet and suddenly moving things at an astonishingly fast clip. This has resulted in what may be my favorite issue so far of the re-launched Wolverine series and an example of how Aaron definetely has some mad writing skills.
4.5 out of 5 stars.
Posted by David Charles Bitterbaum at 2:34 PM