Let Me Get This Straight--Is DC's New Publishing Plan Genuis or Just Plain Stupid? Really, Which Way Will This Go? 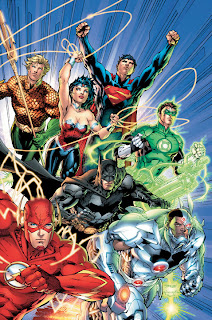 Let me get this straight--and I'm just getting this information out having heard it briefly ago--in September after Flashpoint ends, DC is going to launch 52 new comics in the sense that every previous comic is canceled and possibly being re-started with a new #1 issue. That's 13 new comics a week. Also, we are getting all-new creative teams with, "three quarters of creative teams being shuffled around," and Superman may not longer be married and hooking up with Wonder Woman who also no longer has her hated continuity change that Straczynski did. Plus, Grant Morrison is going to write an in-continuity Superman book.

There also have the big deal of every single comic being day-and-date digital, which means that the exact same day you can buy it on comic stands, you can buy it for your computer/phone/tablet device. This is quite possibly the biggest creative and financial risk DC has ever taken and I kind of am impressed by their sheer gall, but I share the concerns that some have.

This could either be a huge success (I mean, they got USA Today to talk about it, so that's cool) or turn into a huge belly-flop that kills DC in the market with their new #1 books not selling as well as they hope, or changing continuity too much and pissing off enough fans that they lose more readers than they gain, or they just can't make up cash for that whole, "Keeping comics $2.99" deal they have going. Still, I sorta remember when Marvel was though of as the company that took big creative risks and was, "out-there," on the cutting edge. Now, we've got DC comics doing something huge and Marvel...has Nazi robots attacking Washington DC while various heroes and villains pick up hammers that make them super-powered in Fear Itself. No matter what happens, at least DC wins the risk-taking award.
Posted by David Charles Bitterbaum at 11:01 PM