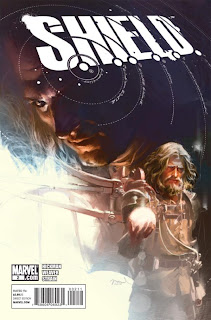 S.H.I.E.L.D. #1-6 And The "Infinity" One-Shot
The first issue of the second volume of this series is coming out soon so why not review this first run? Well, this is one strange comic. It almost seems like it could pretty much be some sort of alternate-universe tale any comic publisher did with its use of famous historical figures as members of a secret society--except for the fact that it does tie in two Marvel characters in the form of Howard Stark and Nathaniel Richards, fathers of two famous Marvel characters. Other than those two however, this is one crazy comic that at first seems to read like a jumbled-mess but by the time I reached issue #6 actually made a bit of sense. Plus, Dustin Weaver turns in art that is utterly, incredibly, unbelievably, gorgeous.

I don't want to spoil some of the famous historical figures who pop up as their big reveals are the shocking last pages of a few issues of these comics, but I will discuss the ones we learn about early on and see a lot of, Leonardo Da Vinci and Issac Newton. Basically the comic boils down to a conflict between them and their opposing viewpoints which leads to a war within a hidden city. Oh, there are also weird celestial babies, a young man named Leonid who has skin made of stars, a "Forever Man," Nostradamus is around a lot chained up, and more crazy stuff. I told you, this reads as gobbedly-gook much of the time, but weirdly starts to make sense as you advance. Plus, even if it doesn't make much sense at times it is so pretty. It does have some nice quiet human moments, such as when Nathaniel Richads and Howard Stark discuss their mixed feelings about joining S.H.I.E.L.D. and possibly never seeing their families again: 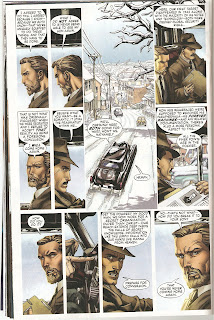 What about just what S.H.I.E.L.D. is? Well, that is sort of covered. Throughout issues #1-6 we also see a history of SHIELD, such as how it first started when the Brood invaded earth in 260 BC. The comic jumps around a lot through history so be prepared to pay close attention as everything you learn may be important later. Seriously though, aliens fighting Imhotep: 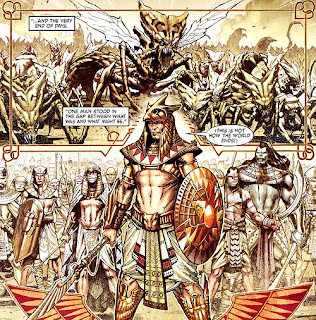 This is a very interesting and strange comic, with it not being too apparent how it ties to the Marvel Universe other than it having a "Stark" and "Richards" involved in the story, and occasional big-time Marvel villains popping up in the past, and there is of course the name, "S.H.I.E.L.D." which is the organization that helps keep the peace in the Marvel Universe, but I think this is a different S.H.I.E.L.D. altogether than the one we know that has been headed by Nick Fury and currently has Steve Rogers at the helm (who knows how "Fear Itself" is going to mess with that equation, though). Oh, the "Infinity" one-shot is pretty good, having been written by Hickman and helping to fill-out some of the plot points of the series, but lacks the indelible art of Weaver. It makes a nice bridge between the first S.H.I.E.L.D. series and the new issue coming out this Wednesday I suppose. 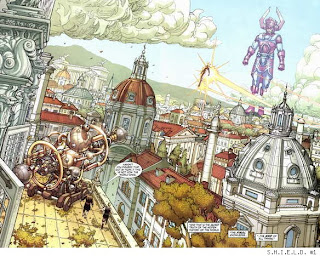 This is a fascinating comic as a story-telling experiment, seeing how many ideas and concepts you cram into the pages and hopefully not lose the reader. The problem is, it did kind of lose me for awhile. I can see why some people absoultely loved this comic and others outright hated it--and why people seem to feel that way about Jonathan Hickman in general. I personally don't outright love or hate him, I really enjoyed his debut comic, "The Nightly News," but dropped his run on Fantastic Four, finding it too unfocused, and otherwise don't follow his Marvel stuff too much, but I still love his independent work. Well, this is about as close as you'll get to an independent comic by Jonathan Hickman that inexplicably is also set in the Marvel Universe so yes, I do quite like it even if it often confuses me. Plus, Dustin Weaver's art is always there when the story goes over your head
4 out of 5 stars.
Posted by David Charles Bitterbaum at 1:00 PM