Enjoyable Considering It Was Two Issues Of Nothing But Talking--Iron Man 2.0 #3-4 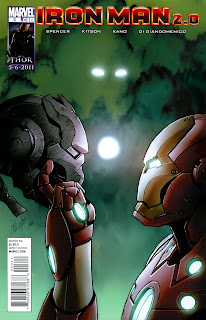 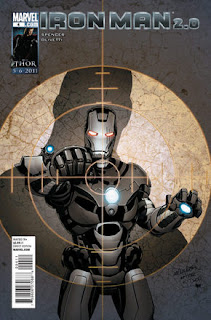 Iron Man 2.0 #3-4
Nick Spencer knows when to let a lack of dialogue speak for itself, having the first five pages of Iron Man 2.0 #3 go by in absolute silence. It shows reflection, regret, and planning.

We then see the consequences of the nuclear bomb dropped on James Rhodes, learn that Palmer Addley has not been who we think, see a Stark associate at dinner, and have a fun conversation between Rhodes and Tony Stark about how ol' Rhodes needs a new suit. Yeah, its an all-talk issue, and that's just fine, because it furthers an interesting plot and results in a cool reveal of the new War Machine/Iron Man 2.0! I didn't enjoy it as much as issue four though.
Issue four of Iron Man 2.0 has the aforementioned Stark associate--apparently named Kaylie--going to a facility holding the records about just who Palmer Addley really is. After some scene-setting we get to her reading the documents and us seeing the discussions she is reading about. What we see is a sad and disheartening tale of a youth with much potential who slowly became more and more alienated before violent consequences resulted. The picture that is drawn of a once-happy young boy becoming a disturbed young man is distressing and illustrates the depressing truth about how our society often ignores many youth who could use our help and support but instead suffer in silence before something terrible happens. It's a strong issue and the more I think about it the more of an impact it has on me, making me wonder just how many Palmer Addley's are out there. 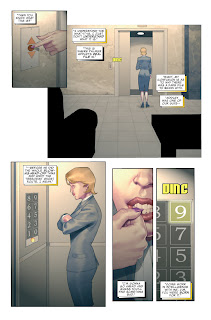 We have a decent issue #3 and a really great #4, I'd say Marvel spent pretty good money making Nick Spencer an exclusive writer based on his output so far. My one complaint would be after the cool reveal of the suit at the end of issue three to not see it at all in issue four is a bit of a tease, but issue four was so good I'll let that slide.The weird thing is, this series starts tying in with Fear Itself starting with the next issue. I don't know if that means the Palmer Addley story will be put on the back-burner for a bit due to that, or if it will somehow be incorporated, but I'm curious to see what will be done.
Iron Man 2.0 #3
3.5 out of 5 stars.
Iron Man 2.0 #4
4.5 out of 5 stars.
Posted by David Charles Bitterbaum at 3:00 PM