Not A Bad Way To End The Series--World Of Warcraft: Curse Of The Worgen #4-5 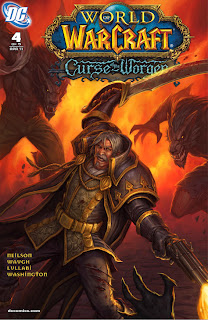 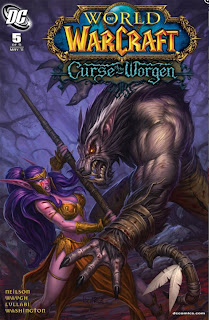 World of Warcraft: Curse of the Worgen #4-5
After my increasing distaste for this series due to the tales tendencies to have a ton of flashbacks and even flashbacks in flashbacks, I was surprised to find that issues four and five were a bit lighter on the trend and therefore also much better. Of course, "much better," than, "bad," isn't saying a ton.


It is around these issues that people who have played through the Worgen storyline in World of Warcraft will see familiar events and get some slightly interesting twists on the tale of the fall of Gilneas with the addition of an evil Worgen named Alpha Prime, a detective recently transformed into a Worgen working against Prime, and a night elf who has been one of the constants in the series, appearing in the present and flashbacks (as night elves live a long time). We see more of the King of the nation and his bonding with his son, the traitorous Godfrey, and the story otherwise improves dramatically thanks to spending much less time rooted in the past and a lot more in the present--although there are still some flashbacks to drag things down ever-so-slightly. 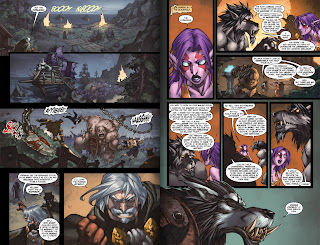 This series started out interesting, slowly lost my attention, and with these later issues drew my eyes back, thanks to some epic battles between humans and Worgen, with the art showcasing the fighting generally quite well--although sometimes the flow of the story can be a bit hard to decipher. By mostly quitting its time-jumping the series can focus on just telling a story and that story is one that is pretty interesting. 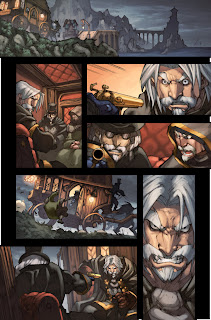 This series has been hit-and-miss over its run, but at least it ended in an above-average way. It wasn't incredible, but to call it terrible would also be incorrect. It was a good enough yarn and these last two issues helped finish it up pretty well.
3 out of 5 stars (for both issues).
Posted by David Charles Bitterbaum at 11:00 AM