Wait, I Thought The End Of The World Was Today Or Something 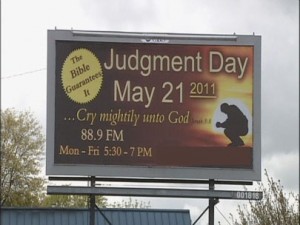 Didn't some crazy guy predict that May 21st, 2011 was when some 200 million people would be raptured up to heaven and the rest of us would be left on earth to suffer through earthquakes and other disasters until the world completely ended in October? Well,  stuff was supposed to start going wrong at 6:00 PM local time at each location and here were are now with a good chunk of the world already in the next day with nary a scratch. I guess the world isn't going to end. I'm quite shocked, and by quite I mean not at all.

I do feel kind of bad for the people who actually believed him, quit their jobs, and sold their stuff to spread the word about the supposed end only to be shown to be utter and complete saps--but then again when you're that gullible, how bad can you feel for a person? Now we can get ready for the crazy folk who claim the world ends in 2012. Hoo boy...
Posted by David Charles Bitterbaum at 8:29 PM