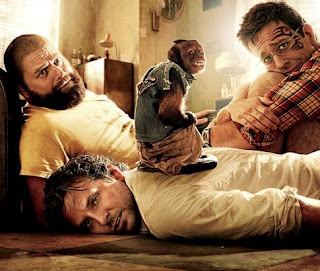 The Hangover Part II AKA Hangover 2
It doesn't always have to be a "Film Friday" segment for me to review a movie, and seeing as how I did do a Flashback Friday bit this week, I thought I would just add  a review of a movie I saw Saturday afternoon that I found very fun to the blog. I mean, the sequel to the very-popular, "The Hangover," couldn't possibly live up to the original, and some critics have been very harsh on it, but while not being as good as the original, I still enjoyed this very much.
Basically the plot is that the guys are back together for the impending marriage of Ed Helm's character in Thailand, and after thinking they are going to have just one beer they wake up with no memory of...well, you know the drill from the first movie. Speaking of the first movie, this sticks to a similar format, with the guys re-tracing their steps to figure out just what happened last night with of course numerous funny things happening--which some people may think is too much like the first movie, but why change a winning formula?

We spend most of the movie with Ed Helms, Bradley Cooper, and Zach Galifianakis--who steals the show with his utterly insane character. Other individuals pop up who might have you going, "Hey, look who it is!" but these three guys are the main stars of the show, and throughout the film they have a great chemistry. Plus, there is a monkey, as shown in the above photo, and monkeys are pretty much always funny. 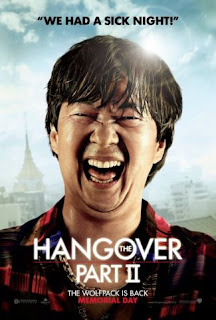 I would say the film is crass, silly, absurd, and very funny. Yes, it sticks to the same method that was used in the first film, but it has enough fresh jokes that it works out just fine. This isn't any sort of deep and complex meditation on human life, its a zany comedy that is worth seeing as you will most likely laugh out loud at least a few times, and giggle plenty more. I'd reccomend it.
4 out of 5 stars.
Posted by David Charles Bitterbaum at 9:30 PM