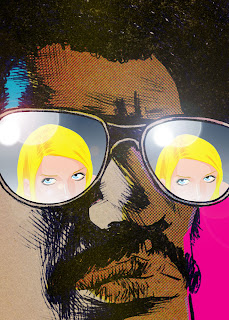 A satiric riff on the era of Blaxplotation (think like "Black Dynamite"), Afrodisiac is an original graphic novel featuring the aforementioned title character on his various adventures, be it pimping, fighting Dracula, wooing countless women, or seducing death herself. This book has already gotten great reviews, so what did I think? I liked it. Why I liked it follows the cut...
Wow. Just one artist illustrated this? Really? The style of illustration changes so often, it just shocks me. Brian Rugg is a great artist along with writer, and the other writer, Brian Maruca is great too. The book doesn't specify who wrote what parts, so I have to assume they worked together. The story is more mish-mash of various fake comic panels or covers with the occasional more cohesive story, but wow, that art! 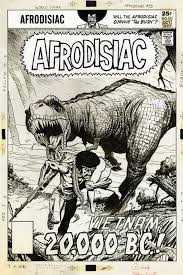 Whether Afrodisiac is fighting Richard Nixon or other elements of "the man" he always comes out on top, and looking amazingly drawn. Let's see another piece:

That is some nice stuff. Anyways, this is a great graphic novel, the art is fantastic, and the jokes come fast and often. True, sometimes the humor falls flat or a story seems to go on too long, but overall this is a great book.
4 out of 5 stars.
Afrodisiac

via Amazon, I say you should buy it.