Marvel Universe Vs. The Punisher, bloody, gritty, and funny? 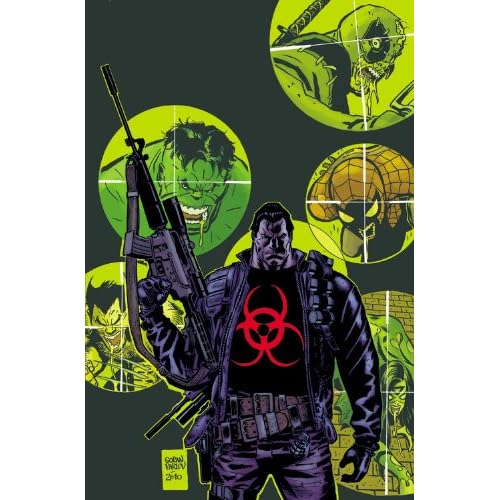 Marvel Universe Vs. The Punisher
Take the Punisher, combine with the concept of the film version of "I am Legend" (one man all alone against monsters in NYC), a bit of "28 Days Later" (people infected with a virus), the idea of heroes eating people from "Marvel Zombies" and throw in some comedy to lighten the mood via fan-favorite Deadpool and you get this comic. Is this mish-mash of ideas any good?

Apparently Marvel Zombies was originally going to be a story much like this one, with the Punisher being the last uninfected man in a world full of zombies. That story changed so the idea stayed available for someone to come along and put their own twist on it. Now, this story isn't about the Punisher versus zombies, it has a virus that makes people more brutal, animal-like, or as Reed Richards puts it, "simple". When the Punisher is the last person left to fight this epidemic, what do you think he's going to do? Well, he's going to start killing: 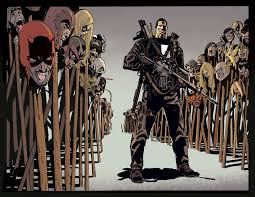 This was a great comic. My favorite part is when the Punisher comments on how people thought the world went mad, but for him it became crystal clear. After all, in a place where everyone is a monster, wouldn't a man who hunts evil be most at home? That is the story at the heart of this comic, if a man like the Punisher is truly any better than the monsters he slays. Other than that concept running through the comic, the main storyline is about the Punisher making a deal with "patient zero (the first super-hero infected)" to save a certain someone from a familiar villain (I don't want to spoil the surprise) so he can find more people who were immune to the virus--in between killing a whole bunch of former super-heroes.
I really enjoyed the art of Goran Parlov, who some may recognize as the artist for much of the Marvel Max version of the Punisher. Jonathan Maberry does a great job with the story, keeping the suspense high but knowing to occasionally break the tension with the dark humor of the Punisher or witty quips of Deadpool. The only thing that bugged me with the story was the explanation of how the Punisher didn't get infected. It's a little convoluted and the story itself acknowledges it too with the Punisher's own disbelief at how he became immune:

Other than that, this is a really good story that I am glad I picked up, with some great art to boot. Plus, I loved the ending--not to give it away, but keep in mind how the Punisher's own worst enemy can be himself. Yes, this doesn't take place in normal Marvel continuity so some fans out there might dismiss it as an unnecessary mini-series, but just because the story doesn't "count" shouldn't make you continuity-geeks out there avoid it. This is a very enjoyable comic and you owe it to yourself to check it out.
4.5 out of 5 stars.
Marvel Universe Vs. the Punisher

, you should buy and enjoy it.