Best Original Graphic Novel of the Year: A God Somewhere. 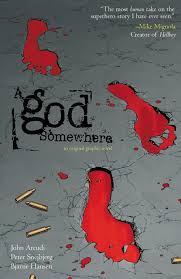 A God Somewhere
This is a strange story. It's the kind of tale I like, the "what if someone with superpowers existed in the actual world?" type of fictional jaunt, and as always, the answer to that question ain't pretty. I didn't read too many original graphic novels this year, but even if I had I still think this would have been high on my list.


The story is about how a regular man named Eric gets powers, helps people, goes insane, and...well I don't want to spoil everything. It's about more than that though. It touches on race (the character we see much of the story through is named Sam and his being black plays a role in the story), what is right and wrong, and...well, it's really hard to describe. 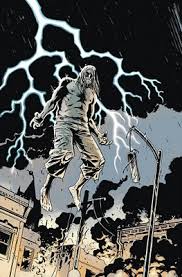 Also, this is one of the most gory comics I have read. The thing is, the violence is justified as it isn't just to shock readers, but show the brutality of violence. So yes, the story kind of has it's cake and eats it too by showing extreme violence while at the same time condemning it, but I'm okay with that. Just be warned. 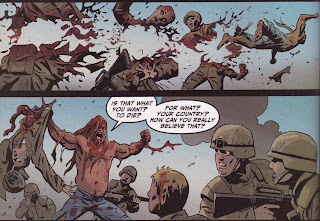 The thing I found the most interesting is the deep friendship Sam and Eric share. I mentioned how Sam's race is important to the story, and one of the important aspects is how colorblind Eric is to Sam's race compared to other people--one of the reasons he helps Sam in flashback when they first meet during a time Sam is being attacked by some racist numbskulls. The way Eric can be some sort of mad-god one minute and just relax and chat with Sam the next makes for a surreal experience. I suppose this is because John Arcudi is a great writer--although I am not familiar with any of his previous work (didn't he write the comic version of "The Mask?"). Also, I have never seen the work of Peter Snejbjerg but darn if he isn't a spectacular artist. Be it drawing mellow moments or huge explosions of action and violence, Snejbjerg does some fine work.

Yes, there are flaws in the story. Eric's motivation for his violent actions is never really made clear as we don't see exactly what he's thinking, the story leaves a lot of questions unanswered (but I think this is intentional), and the way Eric goes from good-guy to dangerous-guy seems quite sudden, but I enjoyed this book so much I was able to look past these issues. This original graphic novel made me think, looked darn good, and was otherwise a great read. Therefore, it is my favorite this year.
5 out of 5 stars.
A God Somewhere  if you take my advice and buy this great comic. Amazon seems out of stock though, unfortunately.
Posted by David Charles Bitterbaum at 10:00 AM