An Examination of War Machine Part 2--Black Heroes versus Heores who are Black AKA War Machine Volume 2: Dark Reign and U.S. War Machine.

War Machine Volume 2: Dark Reign and U.S. War Machine
Now I shall examine the more recent War Machine series and the Marvel-Max mini-series. I shall compare and contrast them, and talk about race in comics too. It should be a good time for all.


Back in December 2001 the Graphic Novel, U.S. War Machine was printed. It collected 12 issues of the Marvel Max series War Machine Volume 2 that had been printed in black and white on cheaper paper. It gave it that "rough and gritty" sort of look and feel. It was written by Chuck Austen--yes the same Chuck Austen who had that disastrous run on X-Men after Grant Morrison--but it was actually pretty good. It was in a different continuity than the main Marvel line so it was able to take some liberties with characters, but what I found most interesting about it was when it tackled the subject of race. The comic had a James Rhodes who was both sickened by a racist organization, and whom had his own racial prejudices.

The art was mediocre as could be, with a weird mish-mash of cartoony-drawings and computer-generated images, but the plot was interesting and the story had a good mixture of seriousness and fun. The comic also avoided a pitfall that sometimes occurs. It wasn't about a black hero, it was about a hero who was black. The difference is a black hero is defined only by their color, their a one-note individual, a hero who is black is a person with a wide range of attributes and interests, with one attribute that affects their life being they are black. The series also has some great action scenes and a twisted sense of humor. It's good and you should read it. 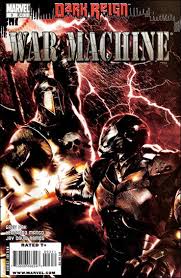 The newest series of War Machine doesn't worry too much about Rhodes being black. It's more about him being a rebel--with race being a side issue. Other than issue six which talks about him standing up for people--such as a multi-racial girl picked on by other children, his race isn't much of an issue. Well, other than an odd instance where Norman Osborn says he thought a seemingly-fatally wounded Rhodes would have yelled, "Dear sweet Jesus, I'm coming home!" instead of just, "Whoa". Yeah, that was probably the most awkward moment of all twelve issues over the two volumes. Norman Osborn is a homicidal maniac, but I haven't ever really seen him as racially motivated. He doesn't feel any particular way about a group of people, (other than mutants) he just kind of hates and wants to kill everyone.

So there isn't much of an exploration of race as there is in U.S. War Machine. That's fine, if we always talked about black characters being black it would be the earlier-mentioned problem of the black hero versus the hero who is black. What does War Machine Volume 2 touch upon then? Well, it's more interesting than volume 1, bringing in some political intrigue as Rhodey is put on trial for supposed war crimes, the Ultimo robot becomes a handy sci-fi piece of tech, and the story wraps itself up pretty nicely. Also, as in the last volume the God of war, Ares, is a hoot. I'd recommend both it and U.S. War Machine for different reasons. The War Machine in normal continuity has some fun high-concept stuff and thrilling action, U.S. War Machine is a bit sillier when it isn't doing some serious explorations of race, or blowing stuff up.

To end on a more positive note than Part 1 where I talked about how War Machine got canceled, I would direct people to the December issue of Previews where, "Iron Man 2.0" is solicited with--you guessed it--James Rhodes as our star. Hopefully things will go better for him this time.
U.S. War Machine--3.5 out of 5 stars (I would go 4, but the art, yeesh.).
War Machine Volume 2: Dark Reign--3 out of 5 stars.
U.S. War Machine TPB

which you can only get from 3rd party sellers unfortunately, but you should try.
War Machine - Volume 2: Dark Reign

if you want to have a pretty fun read.
Posted by David Charles Bitterbaum at 12:15 AM