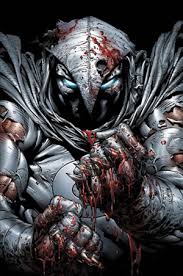 Moon Knight Volume 1: The Bottom
Moon Knight Volume 2: Midnight Sun
Remember Moon Knight? He was kind of popular as Marvel's rip-off of Batman, but with the twist he was totally insane? He had multiple identities he assumed to infiltrate various sectors, be it his "real" self Marc Spector, the rich guy Steven Grant, or cab driver Jake Lockley. Ring a bell? Well, before Charlie Huston was offered to write a reboot of the character not too many people always knew of the character. At the most people recalled him being a West Coast Avenger--a fate worse than death. In the 2000s though Huston came along, and some magic happened. What kind of magic? The best kind, twisted.

The artist you either love or loathe, David Finch drew this reboot, and I usually love his work. Charlie Huston is a writer of crime type novels, and he says in the afterword to the first volume of Moon Knight how he loved the original character. I'm with him, after reading his run I went back into old issues (some great Marvel Essential collections) and really dug the stuff. How did Huston make Moon Knight great again? Simple, he took the character to his lowest point in life ever. He killed his arch-nemesis in a flashback, made Spector both physically and emotionally damaged, and then proceeded to build him back up over the first six issues. Funny thing though, as issues 7-13 illustrate, maybe it wasn't the best idea for Spector to come out of retirement. He is quite franky, brutal. There is a reason the short-lived re-launch "Vengeance Of The Moon Knight" made a big deal out of how stable Spector had seemed to become--these are the issues where he's so close to crossing the line of not-murdering criminals you can't help but wonder if this man is a hero, or just someone who likes hurting people and happens to be on the right side of the law.


This is a theme Huston runs with up to the last and arguably best issue. I would give issue 13 a 5 out of 5 stars, but sadly issues 7-12 really drag, bringing back an old enemy and weakly tying in the Marvel Civil War event that was taking place at the time. Plus Finch quits doing art duties after 7 and the drawing goes a bit downhill until 13's beautifully moody stuff.

Huston really had a grasp on Moon Knight, but sadly he left as the main writer after 13 and assisted new writer Mike Benson for a bit as the series continued somewhat strongly, but toward the end just got way too wacky (i.e. when Spector goes to Mexico and fights some Mexican-wrestler assassins; silly isn't the tone you go with for a Moon Knight comic). Individual issues can stand weakly, and volume 1 reads stronger than 2 other than that (I cannot state this enough) incredible last issue, but as a whole this is one great series that is screaming out to be collected into one big collection--or an Omnibus if you really want to include Benson's pretty good work. I was sad it seemed Moon Knight's run had come to an end after the untimely death of the Vengeance series, but then I hear Bendis and Maleev are taking over, the same guys who did my beloved Daredevil run? Yeah, I'm excited for that.
Volume 1: The Bottom--4 out of 5 stars.
Volume 2: Midnight Sun--3.5 out of 5 stars (although that last issue is a 5 out of 5).
The Entire Run When Read Together--4.5 out of 5 stars.

you should also buy.
Moon Knight #13 : The Uses of Restraint (Civil War The Initiative - Marvel Comics)

the amazing issue you have to buy if you refuse to get any of the others.
Posted by David Charles Bitterbaum at 12:00 AM